JUST like their senior counterparts the intermediate clubs of Kildare have reached the business end of Championship 2020.

Three matches are down for decision on Saturday, two at Manguard Plus Hawkfield, and one at Conneff Park in Clane with the remaining quarter final fixture back at the Centre of Excellence on Sunday. 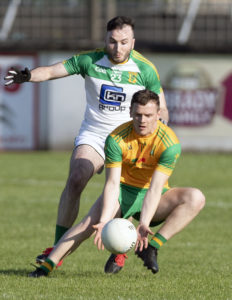 One of the early favourites, Kilcock, face the ever improving Suncroft in the opening quarter final on Saturday. Kilcock had plenty to spare over another of the possible favourites, Ballymore Eustace, on Sunday last to maintain their unblemished record in the 2020 Championship.  Kilcock’s main worry might be that they were never really tested in the Group Stages whereas their opponents, Suncroft, had to fight a number of battles before coming second to Ballyteague in Group A.

Jason Gibbons, Cormac Divilly, David Duke and Darron Acton will provide plenty of threat for Kilcock but they will need to be on their toes to stop the likes of Fionn Dowling, Eoghan Lawless and Tomas Cleary from getting a foothold for the ‘Croft. Kilcock should do enough to win with the bench probably needed to see them through.

Ballyteague have been on song in claiming their three Group Stages wins with county man, Jimmy Hyland, leading the choir with his scoring exploits. This is not a one man show however and the likes of Stephen Connolly, Stephen and Padraig Murphy all capable of causing damage. Ballymore struggled against Kilcock last week and Ben Noone, Niall Murphy and Patrick Murphy will lead their charge but they are expected to fall short on this occasion and the Larks should progress to the semis.

The meeting of Allenwood and Leixlip could be the match of the quarter finals. Allenwood, led by the irrepressible Johnny Doyle, topped their Group and indeed probably should have gone through unbeaten but for a blip against Nurney. Fionn Moran is their play-maker in some respects but as well as Doyle, Allenwood have scoring forwards in Johnny Byrne, Darren Judge and Eoin Bagnall.

Leixlip just pipped St Kevin’s to second spot in Group C with a dramatic last gasp winning goal from Darren O’Connor last weekend, however it would have been a disappointment to them if the Radley Park men had missed out on the quarter finals. Tommy Moolick is his industrious self as usual and his clash with Johnny Doyle should be interesting. Paddy Meagher, Niall White and Neil Jordan are others who will need watching however it is expected that Allenwood will carry too much as a team to be denied a semi-final spot.

Sunday’s final IFC quarter final offering pits Clogherinkoe and Two Mile House together in Hawkfield. Even though they lost in dramatic fashion to Leixlip last time out Clogherinkoe has been the name on everyone’s lips for glory this year and their performances to-date haven’t dampened those expectations. In Cein McMonagle, Jack Robinson, Ciaran Gravin and Mark Nolan, the Clocks have players of talent and scoring ability.  After a shaky start to their campaign Two Mile House are now playing to their potential and the likes of Didier Cordonnier, Peter Kelly, the Sherrys and Chris Healy will be prominent throughout.

Clogherinkoe’s consistency just gives them the slight advantage to make the last four.