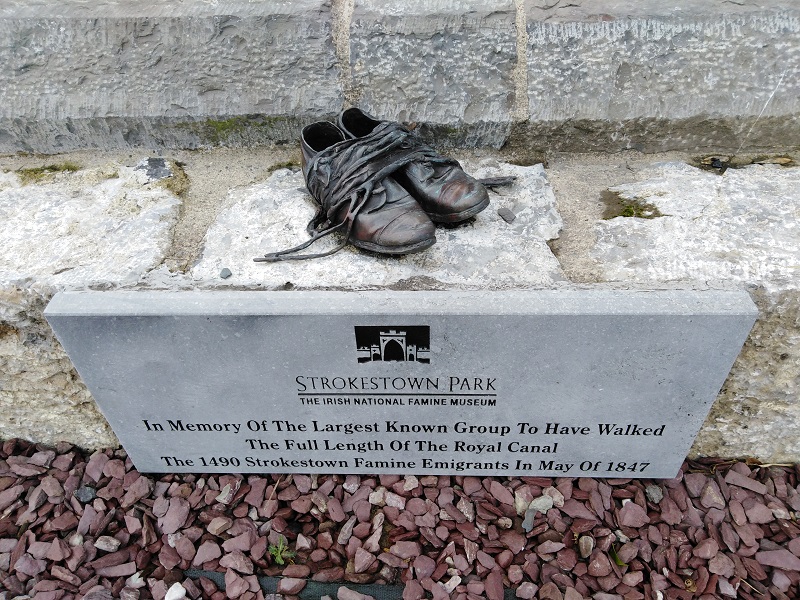 Anyone who’s enthusiastic about Irish history or heritage might be interested to know that a new interactive outdoor experience, the National Famine Way, passes through Kildare on its way from Roscommon to Dublin.

It was launched recently by the National Famine Museum at Strokestown Park in Roscommon with a unique passport/guide and OSI trail map. The 14-page passport/guide highlights local historical landmarks and allows walkers and cyclists to record their progress with 27 stage stamps along the specially developed route.

The passport and map have been described as an integrated inter-county collaboration between Waterways Ireland and county councils along the route – including Kildare. The trail is designed to be accessible for families, schools, casual walkers and cyclists, not to mention famine and historical enthusiasts. A completion certificate is awarded at the end at EPIC The Irish Emigration Museum.

The 165km heritage and arts trail, which mostly runs along the Royal Canal, details the ill-fated journey of 1,490 emigrants who walked from Strokestown Park to ships in Dublin in 1847, at the height of the Irish Famine. The group of walkers, who subsequently became known as the ‘Missing 1,490’, were tenants of landlord Major Denis Mahon who offered them the grim choice of emigration through ‘assisted passage’, starvation on their blighted potato patch farms, or a place in the terrifying local workhouse.

Having been ‘walked’ under the close surveillance of Mahon estate bailiff John Robinson along the canal towpaths, they were transported to Liverpool where they boarded four different ships for the perilous voyage to Quebec.

The story of the Missing 1,490 has led to a research programme by the University of Toronto to uncover their life stories, which is slowly following family threads in America and Canada.

While walkers and cyclists can avail of the trail for free, the passport is on sale for €10 – it’s available online and from the National Famine Museum. If you’re planning on doing some more sightseeing, it also offers discounted access to Strokestown Park House, Croke Park Museum, the Jeanie Johnston famine ship, and EPIC.

The new passport/guide is centred around the walk of one of the original famine walkers from Strokestown Park, 12-year-old Daniel Tighe, who remarkably survived the horrific journey to Canada on one of the worst famine ships. Award-winning author Marita Conlon-McKenna has written vignettes reimagining Daniel’s journey in 1847 and connected to over 30 pairs of bronze children’s shoes interspersed along the route. One of those vignettes is set in Maynooth.

‘It is evening by the time we reach Maynooth with its wide harbour. We wash and bathe our blistered and swollen feet in the water. It feels good. Some priests from the big college St Patrick’s come down to find out where such an enormous group of us are going. They give us their blessing.

‘The older people find this a great comfort. I don’t know how much I believe in God now, since my Da died.

‘We lie down on the grass and hard ground and rest for the night rubbing our weary legs and feet. Mam is so tired that she falls asleep. Uncle William is too tired to talk for he has had to carry little Maggie much of the way.

‘Some kind people from the town give us some bread and ask about our long journey.

‘By sunrise it is drizzling with rain. Catherine is hot and says that her head and feet hurt and she’ll not walk any more. Bernard Og is hungry and cries a lot. Mother cajoles my little brother to get back on his feet and I carry Bernard Og for a while to give mother a rest.’

Anne O’Donoghue, CEO of the Irish Heritage Trust, has thanked Roscommon Co Council for their support and vision for this project, which she said “is designed to make history and heritage accessible in an engaging way”.

She added that “the commitment over the last ten years of Waterways Ireland in creating the Royal Canal Greenway by investing over €5 million means that the National Famine Way is now available to everyone. This heritage trail not only links two significant Irish museums but also makes the connection between Ireland’s Hidden Heartlands and Ireland’s Ancient East.

“In addition to the health, historical, cultural and arts impact, the trail also has the potential to open up rural Ireland and offer an economic boost to local communities with cycling hire, cafés, bars, shops and accommodation all benefiting with an expected economic impact of over €2 million spent along the route.”

Speaking on the historical and cultural importance of the initiative, Caroilin Callery from the Irish Heritage Trust and National Famine Museum remarked that “as walkers and cyclists experience the natural beauty of the National Famine Way heritage trail, the passport/guide and OSI map incentivises them to explore lesser-known sections by slowly unfolding the rich local history wrapped in the journey of famine emigrants.

“They will also be reminded of our history, through a mix of evocative storytelling, song, art installations and cultural centres along the route. The passport/guide brings the historical journey of the 1,490 Famine emigrants alive by allowing them to follow in their footsteps 173 years later.”

To book your participation along the route or for more information, visit strokestownpark.ie/famine/walk.