The National Governing Body of Irish Snooker and Billiards will announce an important day for the Cue Sports on this Saturday, 26 September.

For over five decades the Sport has been under the control of the Republic of Ireland Snooker and Billiards Association, (RIBSA), but on Saturday there will be a re-rebranding of the organisation. 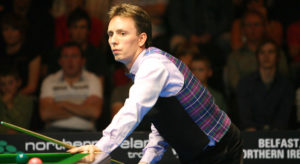 Snooker star, Ken Doherty, has been involved with RIBSA in the past
Photo: ©INPHO/Declan Roughan/Presseye

Chairman of SBI Dylan Rees said “We want to continue the magnificent work of
RIBSA who over the last 50 years plus have been true servants to the game in Ireland and as well as moving into a new era for our sport we also want to remember the fantastic, dedicated and brilliant work that RIBSA has done over those years.

We at SBI are really excited about the future of the sport, the development of the game and the inclusion of everyone within the new SBI family”

There have been many stars of the game who have been part of RIBSA such as Ken Doherty, Fergal O’Brien, Eugene Hughes and now our newest WST Professional , Aaron Hill

SBI believes that this new step forward for Cue Sports will be another great chapter to be written in the development of the game and the Referee’s, Tournament Directors and Council members.