WRITE Moorefield off at your peril. After two poor outings they started disastrously against Johnstownbridge and later went down to fourteen men but called on all their experience to eventually overwhelm Luke Dempsey’s charges. 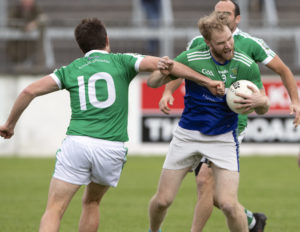 Aaron Masterson was controversially red-carded for an off-the-ball foul on Cathal McNally but Moorefield love a battle and whatever doubts existed about their form, there’s no issue with their desire.

For Johnstownbridge this was a familiar story of their inability to live with the likes of Moorefield and Sarsfields despite the handful of talented county players at their disposal.

Overall strength in depth remains elusive. With Seán Hurley injured again they at least could start Daniel Flynn but despite his early goal he did not look fully fit and played a peripheral role, rarely straying from the full forward position.

They rocked Moorefield with a vibrant start. Shane Flynn was excellent in the early minutes and got the first point after a patient build up. Sam Doran added to it after a morale-boosting turnover at the other end.

Éanna O’Connor, Moorefield’s most impressive forward once more, wriggled free to kick their first point and went on to reach double figures.

With four minutes gone Johnstownbridge gave themselves a platform when McNally attacked from wing back, found Niall Vaughan and the inside forward made it three goals in three games. Three minutes later they were in dreamland. Daniel Flynn caught Keith Cribbin’s high ball above Mark Dempsey’s head and finished in typical fashion.

Moorefield looked in peril, but they immediately cranked up their performance level and from play Jason Phillips, Ian Meehan and Kevin Murnaghan got successive points to get them moving. This was real championship fare now.

For the remainder of the half Johnstownbridge only scored two points, a converted mark from Paul Cribbin and a good point from the excellent Doran, while O’Connor got going with four frees and Masterson in injury time fisted over to make it a one-point game at half-time (2-4 to 0-9).

Moorefield had the momentum and by the 40 th minute they had taken the lead, despite two more Doran points settling Johnstownbridge. O’Connor fired over four more frees to make it 0-13 to 2-6.

Masterson’s dismissal after an innocuous off the ball nudge on McNally merely re-doubled Moorefield’s determination and Adam Tyrrell emerged from under Keith Cribbin’s spell to score two points and push the gap to three.

Another O’Connor free was matched by one from Doran, but in between Tom Kinsella pulled off a crucial save from McNally.

Tyrrell and the younger Cribbin exchanged points as the clock wound down and Johnstownbridge really needed another goal. Ciarán Kelly pushed Moores four clear before Doran gave Johnstownbridge hope but they lost Joey Higgins to a red card before

Moorefield applied the coûp de grace when substitute Niall Hurley-Lynch was on hand with a characteristic goal after a move involving Tyrrell and Houlihan. Moorefield had dug deep and they will remain a tough nut to crack.

Full Reports on all Kildare Football Championship matches in this week’s Kildare Nationalist, out now.