Murphy wins it in extra-time for Leixlip 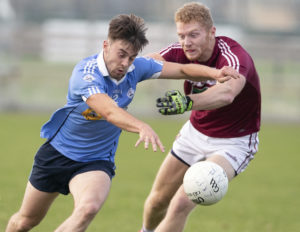 Allenwood’s Darragh Malone wins the race to the breaking ball ahead of Leixlip Ronan Fitzsimons during the Intermediate Football Championship: Photo: Sean Brilly

Relying on Neil Jordan’s free-taking, Leixlip were only four points adrift in the 28th minute, but when Meagher and Eamonn Murphy added concluding first-half points, Leixlip trailed 1-6 – 0-7 at half-time.

But when Ciaran Fadian finished a poor Allenwood kickout to the net and Tommy Moolick scored a penalty, Leixlip led 2-9 – 1-8 before the third-quarter water break. Shane McCormack denied Brian Gibbons a game-winning goal as Allenwood surged with two stunning points from Byrne and Doyle. However, Murphy’s responding ’45 was struck just as sweetly.

Allenwood soon levelled when Judge slotted a 63rd minute penalty and then followed up with a calmly-taken 64th minute score from distance. Allenwood thought they’d won the game when Byrne kicked a vital point in the 68th minute, but Murphy’s 70th minute free set the game to extra-time.

Without any score for the full ten minutes of the first period of extra-time, Doyle gave Allenwood a one-point lead on the stroke of half-time.

Judge handed Allenwood a two-point lead at the beginning of the second period of extra-time, but Murphy reduced the margin to one-point with an 85th minute free. So, when substitute Ciaran Silke levelled the game in the 89th minute, the opportunity fell to Murphy to win the game with a 93rd minute free.

Full coverage of all Kildare Football Championship games in this week’s Kildare Nationalist, out now.