Klub Kildare continue to impress in the SSE Airtricity U13 National League after a well-deserved win over Kerry in Tougher Park on Saturday afternoon.

It was important for Klub Kildare to win their fourth game of their National League campaign having drawn, lost and won the previous three fixtures. 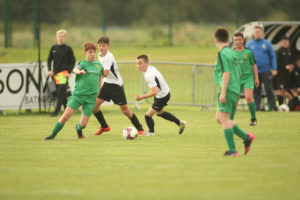 Klub Kildare started strongly and took control of the game from the opening minute. Paul Roberts Kildare side opened the scoring in the third minute when captain, Egor Vassenin received the ball on the edge of the box and fired the ball off goalward as it hit off the crossbar and went in.

Klub Kildare did not take the foot off the pedal after their early goal as two minutes later Yusuf Oladele ran down the wing and whipped in a lovely cross which was knocked down to Donnacha McCarrick who narrowly headed wide.

Kerry began to come into the game after 10 minutes winning three free kicks in 5 mins in Klub Kildare’s half of the pitch. Kildare defended each free very well, clearing their lines each time.

Klub Kildare began to put more pressure on the Kerry defence and had chances on 23, 26 and 28 and 32 minutes

The first half ended 1-0 to Klub Kildare. Kildare’s attackers Yusuf Oladele, Egor Vassenin, and Donnacha McCarrick were very lively in the first 35 minutes and Kerry were lucky to only concede one goal.

Klub Kildare were soon on top again as four minutes after halftime substitute Kian Brunton darted down the left wing, cut inside onto his right foot and curled the ball from just inside the box into the bottom right corner, grabbing Kildare’s second.

Two minutes later Klub Kildare found themselves with a free on the right side. Kian Brunton’s whipped cross was knocked down by Adam Nolan to Dylan Dunne who tidily finished the ball into the bottom corner.

In the minutes that followed, Kerry got a hold of the ball and began to put the Klub Kildare defence under pressure, Klub Kildare held out until the 60th minute when Kerry’s Neal O’Shea’s volley met the top corner giving Kerry something to fight for.

The game finished 3-1 to Kildare after a superb performance by the team all round. Paul Roberts and the coaching staff will be delighted with the way their team played. Klub Kildare’s next fixture is against Waterford on Saturday next at 3.30pm in Tougher Park.

Klub Kildare: Excitement builds for second phase with everything to prove