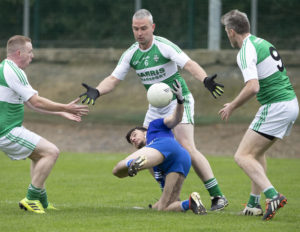 Robertstown’s Danny Scully has his run held up by the Castlemitchell defence including Brendan Harris and John Fennelly during Group B Round 4 game of the Tom Cross Junior Football Championship Photo: Sean Brilly

Deadlocked on four occasions in the second-half, even after Robertstown’s Peter Fogarty received a red card, Mulhall’s last-minute goal lifts Castlemitchell into second place in Group B behind Robertstown.

Early Jason Butler and Mark Kelly goals by the 10th minute had Robertstown looking in good shape and while John Fennelly and Joe Maher responded, when Butler and Joe Kavanagh added further points.

Trailing by 2-3 to 0-5 in the 28th minute put Castlemitchell in a precarious position, but Paddy Ryan, O’Rourke and Conor Curtis points reduced the deficit to 2-3 to 0-8 at half-time.

When Mulhall levelled the game twelve minutes into the second-half and Hogarty got his marching orders, Castlemitchell seized the initiative.  The teams remained deadlocked over the next ten minutes with Oisin O’Brien, Mulhall, Curtis, Niall Kane and Kavanagh levelling the game at 2-6 – 0-12 in the 55th minute.

Robertstown seemed to regain control when Scully kicked two points by the 60th minute, but when Mulhall was given the chance late in the game, he ensured Castlemitchell would record a famous victory.

Full coverage of all Kildare GAA Football Championship games in this week’s Kildare Nationalist, out now.