A last gasp goal, deep into injury time, from Paul Fitzgerald snatched victory from the jaws of defeat for Ardclough against a spirited Éire Óg Corra Choill side in a chilly Manguard Plus Hawkfield on Wednesday evening. 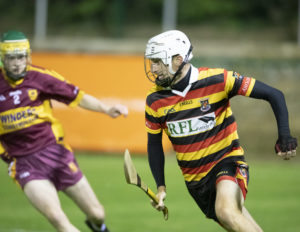 This truly was a game of two halves as Ardclough dominated the first, to lead by six points at the break, while Éire Óg turned the game on its head in the second period, to hold a one point advantage heading into the closing seconds of the clash.

Ardclough raced in to an early lead and went 0-4 to 0-0 in front, thanks to points from Tony Spain, Sean Whelan, Colum Buggy and Paul Fitzgerald respectively, however three frees and a 65 from Éire Óg’s number 12, Liam Dempsey, drew the sides level.

The first goal of the game came shortly after when Martin Fitzgerald played an
excellently weighted ball into the full-forward line, where Sean Whelan brilliantly caught the ball, turned his man, and buried it low into Paul Dermody’s net.

The two sides exchanged further points before the game saw its second goal, which, it has to be said, came against the run of play as Timmy Hennessy netted Éire Óg’s first score from play on the 22nd minute mark.

Ardclough finished the half just as they started it, with four points unanswered, this time courtesy of Declan Molloy, Johnny Reeves and Paul and Martin Fitzgerald to leave the score 1-10 to 1-4 at half time.

Éire Óg mounted a brilliant come back in the second 30 minutes and came within touching distance of victory. They outscored their opponents by 0-10 to 1-3, with Liam Dempsey scoring six of those points, all from frees, while Timmy Hennessy, Conor Kielty, Rory O’Neill and substitute Jack Higgins all raised white flags.

Ardclough lacked the cutting edge that they had shown in the first half and two
Martin Fitzgerald frees and a point from play from his brother Paul’s hurl was all they had to show on the scoreboard up until injury time.

Trailing by a point, the two Fitzgerald brothers combined just like they have done many times down through the years to come up with a vital score; Martin played a sideline cut into the danger area and Paul reacted quickest to rifle the ball home and cancel out all of Éire Óg’s previous hard work as Ardclough recorded a narrow two point win.