Eadestown retained their senior football championship status for next season by defeating Maynooth in the most dramatic of circumstances in Clane on Saturday. Mikey Quinn and Eddie Conroy proved to be the heroes for the men in blue in the penalty shootout with Quinn excellently saving Neil Flynn’s penalty, low to his left, which set Conroy up to seal the victory with the next penalty and he obliged, firing past Mark Donnellan in the Maynooth net. 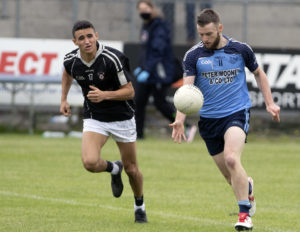 Amazingly, there wasn’t a single score in the opening 11 minutes of this game, until Sean Higgins, the Maynooth half-back broke the deadlock, with an excellent point. What followed was then arguably one of the best games of this year’s Joe Mallon Renault SFC, as it went right down to the wire.

Unsurprisingly, the sides were level at half time in normal time on a score-line of Maynooth 1-4 Eadestown 0-7; Maynooth’s goal coming from Cathal McCabe. McCabe raised his second green flag of the afternoon, five minutes into injury time at the end of the second half to force the game to extra-time.

Prior to that, Eadestown had worked their way into a three-point lead with Cian Bolton and Conor McCarthy doing the majority of scoring and looked as though they were heading for victory. With the score at 2-11 to 0-17 by referee Killian Jones’ full-time whistle, this relegation semi-final was balancing on a knife-edge.

The opening period of extra-time saw Cian Bolton and Neil Flynn exchanging 0-2 points apiece, to ensure the game remained level at half-time and it stayed that way at full time too, 2-16 to 0-22.

With a winner having to be declared on the day, a penalty shoot-out into the Prosperous end of Conneff Park in Clane was the only way these two sides could be separated and it finished up 7-6 in favour of Eadestown, with the aforementioned substitute, Eddie Conroy, scoring the all-important winning spot-kick to ensure his side’s safety and plunge Maynooth into a dreaded relegation final.

Full coverage of all Kildare GAA Championship games in this week’s Kildare Nationalist, out now.