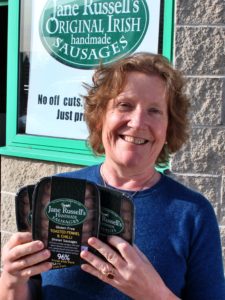 Jane Russell of the Kilcullen Link Business Park has been supplying her sausages to the Grangecon operation since it began.

By Brian Byrne
WHEN it comes to fresh food, there’s nothing more fresh than that produced by a neighbour. And if you can pick up all that you need from the one place at the same time, it makes things even better.
That’s the premise behind the NeighbourFood business being run by Hannah Fox of Grangecon, which has a number of suppliers from Kilcullen and other parts of County Kildare as well as Carlow and Wicklow. For producers and customers alike, the online-ordering enterprise seems to be working a treat.
“It was started in Cork about two years ago by a food producer and an IT friend, who saw it as a more efficient way for the artisan food business to work,” says Hannah, who is from Grangecon originally but only moved back four years ago after being abroad as an aid worker. “I had a friend who was constantly suggesting I get involved with it, the last time in March just as the world was falling apart. It seemed then to be the right time.”
It was. Local food producers who depended on Saturday markets for much of their business had nowhere to go when Covid restrictions closed those venues. While there were other NeighbourFood operations in Tinahely and Carlow among the 40 or so franchises now running around the country, Hannah felt Grangecon might be a very suitable centre.
“We’re not very near any big shops, and for people in this rural area, going to a market for some artisan cheese or similar could mean a three-hour trip. With NeighbourFood, they just order online from our range of producers, and pick up their orders on Thursday evenings.” 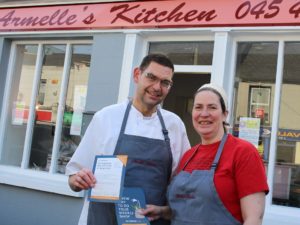 Back in March, Hannah first got in contact with a few local food producers. Very quickly, as the lockdown progressed, they were contacting her. At this stage she has 26 producers on her page on the NeighbourFood platform, and around 85 regular customers. She plans to grow the numbers of both.
“We have an amazing selection of producers, with a fantastic range of products including vegetables, dairy, meat, bread and much more. One of the things I’m now working on is getting in contact with craft producers in the area for the run-up to Christmas, because I think that there may not be many Christmas market opportunities this year.”
Hannah’s father Richard Page farms in Grangecon, so she has the producer knowledge built in, so to speak. She also loves food, and trained for the hotel industry in a cookery school. “For some time I made my living cooking, but then went to work with Concern with my husband, then my boyfriend. We have helped with the post-tsunami cleanup in Indonesia, and most recently we worked in Kenya. We came home because our children were at the age where they needed some consistency.” Their eldest has just this year started secondary school.
Hannah agrees that her hotel work background was useful both as an aid worker and in her current enterprise. “I love to organise things,” she says with a quick grin. “When we went to Africa first, I ran a camp where pilots were flying in and out with aid supplies, and now with NeighbourFood Grangecon I have the organising part too.”
The system has an attractive simplicity. The market is open online from Friday until Tuesday evening, where customers can build up their order baskets. “That gives the producers Wednesday and Thursday morning to produce and pack each customer’s order. On Thursday afternoon, they come and drop each order into the relevant customer crate. My main job then is to check and recheck each crate against the orders and make sure that everything is in place.” The customers then come in a Thursday evening time-slot to pick up their crate.
Seven months in, does Hannah see the enterprise as a viable long-term business? “Well, so far it has been, through the summer. I know there’ll be peaks and troughs, and as long as the troughs aren’t too deep, I think it should be. Expanding into the craft area will help, I think.”
Producers set their own price, and 80pc of that is paid directly to them once the orders have been fulfilled. The remainder is divided between the NeighbourFood platform owners and the local market operators, and also pays the bank fees for money transfer. Operators like Hannah pay their own premises rent and insurance. The Grangecon market operates from the village hall behind the church.
“I think it also works in Grangecon because this is a village where everybody gets in behind each other on projects, and supports everybody. So we have the Village Kitchen Cafe, and we have a Zero-Waste stall in the village every Saturday, among other community projects.”
And the cost of the food itself? “Well, artisan and organic food from small producers will usually be a bit more expensive. But what I find with my own family is that the produce itself goes further than what you might buy in a supermarket, so there’s a balance. And I really love the idea that my children are eating the very best of food.”
For Kilcullen baker and patisserie Armelle’s Kitchen in Kilcullen, the NeighbourFood Grangecon and others has helped when they were closed off from their previous markets presence during the last months. “It works out very well for us, because the customer orders, we deliver, and the customer picks it up,” says Kenny Rorie, who runs the patisserie with his wife Armelle. “It especially means zero waste … sometimes at the market you might sell everything, or on a bad day come back with a lot unsold. So it’s a very efficient system for people like us.”
Jane Russell of the Kilcullen Link Business Park has been supplying her speciality sausages to the Grangecon operation since it began. “We were delighted to see that there was such an initiative locally, and Grangecon is a perfect location for it, with a good representation of local suppliers. For us, we’re able to control what is sold, control the price, and for seasonal product like our current venison sausages it means we can make whatever is ordered. You can’t do that in a shop, for instance.”
For Deborah Doyle of Brambles Cottage Kitchen, who supplies bakery products, the advantage is again a no-waste one. “I bake exactly what needs to be baked, and I turn it around in 24 hours. There’s no guessing what people might want, like selling at markets when sometimes stuff has to be thrown out after two days because it didn’t sell.”
Hilda Crampton from Castleruddery Organic Farm sells vegetables through NeighbourFood Grangecon and says it gives people easy access to really good food. “It keeps money locally, and money spent locally goes an awful lot further in a community.”
And somehow it all tastes better when it is a neighbour’s food …