IT’S the day before the Joe Mallon Motors SFC semi-finals and we are no clearer as to who might make the Final on Saturday 3rd October. Or are we?

Even if there was a little disquiet among clubs about the lack of confirmed notice of the date and times of tomorrow’s semis, credit must be given to the Kildare Co Board, the CCC and of course the club’s and the players for the efficient manner with which this year’s championship has been organised despite national and local lockdowns and other restrictions. Credit also to County PRO, Christine Murray, who produced on-line team sheets for all games and for the minute by minute score updates from ALL championship games. 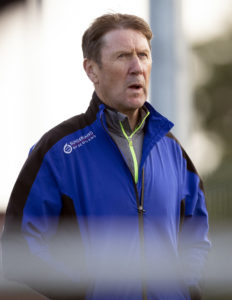 Kildare Manager, Jack O’Connor, will have plenty to ponder after watching the 2020 SFC          Photo: Sean Brilly

The pity is that spectators, or more spectators to be precise, were not on hand to witness what were some interesting and intriguing games. After the initial First Round series of games in which  some heavy beatings were handed out, matters levelled off and we had some high scoring games and Raheens shock defeat of Moorefield.

At the end of it all though we are left with the four teams who were tipped to occupy the semi final positions before a ball was kicked in this year’s Joe Mallon Motors SFC.

Make no mistake about it all four teams, Athy, Celbridge, Moorefield and defending champions, Sarsfields, are all there on merit having moved through the Group stages quietly and effectively, even allowing for the Moorefield blip in Round 3.

Does that leave us any wiser as to which two teams will contest the Dermot Burke Cup in a week’s time? Not really! Moorefield and Sarsfields, outside of Athy and Celbridge supporters, are still most people’s favourites for the final. Having said that though, both Athy and Celbridge can have claims of replacing either or both of the Newbridge two.

Celbridge have been particularly impressive with their running game under Manager, Dave Clare. They showed no mercy in dismissing the young pretenders of Clane last weekend. Fergal Conway is having an outstanding season, both for the footballers and hurlers, but this is no one man show. Kevin Flynn, Tony Archbold, Mick O’Grady, Paddy Brophy, David Hughes and Kevin Callaghan, among others, have all contributed to the Celbridge bandwagon in 2020.

Will there be memories of the county final of a couple of years ago when they went under to a 13-man Moorefield side that went on to win the Leinster title? With a new manager and more mature players that poor day is probably a distant memory at this stage.

It certainly won’t be used as a motivational factor by Roli Sweeney and his Moorefield team. Unfortunately they will have been distracted by, what appeared to be, the harsh sending off of Aaron Masterson and the subsequent upholding of that decision by the Kildare Hearings Committee. As of now the midfielder will miss the semi-final unless his appeal to the Leinster Council is successful tonight.

All this sideshow could have an affect on Moorefield but Sweeney has too much experience as a player and as part of county backroom teams, to allow for this diversion to impinge on his preparations. It might even be used as a motivating factor.

Taking all this sideshow aside Moorefield are still a formidable team, even without such inspirational figures as Roli, himself, as well as Daryl Flynn and James Murray. The defence is still backboned by many who have Leinster medals in their back pockets and although the scoring exploits were shared, too much perhaps, by Adam Tyrrell and Eanna O’Connor, Niall Hurley-Lynch showed he hadn’t lost his goal poacher instinct last weekend. 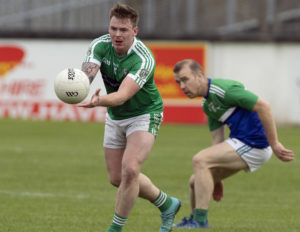 Celbridge will have to play to their best possible running game to overcome the past masters of teams that will wear you down. On the converse to that any chink in the Moorefield armour will be expertly exploited by Dave Clare’s men. Moorefield to defy the odds again I think.

Those who will have watched the Celbridge/Moorefield game will be hardly out the gate in St Conleth’s when the men from Athy and Sarsfields will take the field. As has been said many times this year and particularly after every round, Sarsfields are showing no signs of loosening their grip on the Dermot Burke Cup.

Apart from a less than assured performance against St Laurence’s in Round 3 when Billy O’Loughlin decide to “experiment” a little, Sarsfields have performed like champions again. Conor Hartley, Con Kavanagh and Daragh Ryan have been very prominent in defence while Matty Byrne is his consistent self in midfield.Up  front  Ben McCormack, the evergreen, Ray Cahill and Barry Coffey are a potent force that need a lot of defensive attention.

What of Athy? Vinny Walsh’s charges they did everything that was asked of them and more throughout the Group Stages including a very late show in defeating Clane. Again in the quarter finals they were effectiveness personified against Round Towers. A team that contains the likes of Mark and David Hyland as well Mick Foley cannot be discounted. At midfield Kevin Feely and Paschal Connell are in effect a county pairing while up front the scores come from Liam McGovern, James Eaton and the ever impressive Niall Kelly. 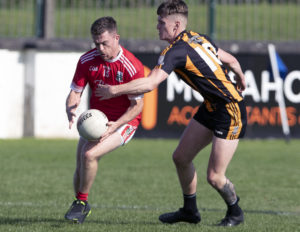 Athy’s Niall Kelly in action against Round Towers in the SFC quarter final      Photo: Sean Brilly

Just like Celbridge in the first semi final, Athy will have to be at their very best to win here but anything less than their true form from Sarsfields and they will be severely punished. We’ll go for the defending champions to reach the final, after a tough contest.