NEWS is coming through tonight that Moorefield’s Aaron Masterson has lost his appeal to the Leinster Council. 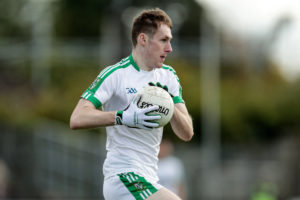 The midfielder received a straight red card in the quarter final match against Johnstownbridge last weekend for what most observers felt was an innocuous contact which was missed by the Referee but brought to his attention by one of his umpires.

Masterson lost his appeal to Wednesday night’s meeting of the Kildare GAA Hearing’s Committee despite providing video evidence to have the red card rescinded. A one game suspension was handed down by the Committee on the night which meant that he would miss tomorrow’s Senior Championship semi-final against Celbridge.

Moorefield then took the matter to the Leinster Council who heard the appeal tonight. Many felt that the former Kildare U20 All Ireland captain would be cleared by the Leinster Council but despite presenting what was described as a good case the Council surprisingly upheld the decision and the one game ban will now stand.

It was probably a possibility that Moorefield could appeal that decision further but time constraints would likely have put paid to that option.