Ardclough victory not enough to see them into semi-final

Although Ardclough recorded an impressive seven-point victory over Coill Dubh inManguard Plus Hawkfield on Tuesday evening, it wasn’t enough to see them progress to the semi-final stage, as Éire Óg Corra Choill’s win over Celbridge ensured their progression to the last four on score difference. 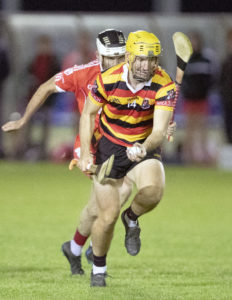 The game started at an electrifying pace, with both sides exchanging a number of points inside the opening five minutes, leaving the score at 0-4 points apiece, before Coill Dubh kicked on, taking a four point lead, thanks to three points from Conor Carew and one from Thomas Byrne.

Martin Fitzgerald responded with a point from a free to cut the deficit to three, but that was soon cancelled out by an excellent score from Declan Flaherty, playing at centre-back for Coill Dubh. Fitzgerald then got the first goal of the game in the 24th minute with a brilliantly driven shot, low in to the bottom corner of Aaron Fox’s net.

This seemed to spark Ardclough into life somewhat and they finished the half the stronger with points from Fitzgerald and Tony Spain, after Conor Carew had knocked over a couple of frees for the opposition, to leave the sides level at the break, 1-8 to 0- 11.

Ardclough kicked on in the second half, and playing with the wind, they hit the opening three points courtesy of Cillian Burke, Enda Duane and the ever-reliable Fitzgerald. Conor Carew was proving reliable himself from placed balls and Coill Dubh relied on his accuracy throughout the course of the game and he pointed a further 0-3 in the second period.

Ardclough began to pull away however and continued racking up scores at crucial times in the game with Tony Spain, Martin Fitz and Paul Fitz at the heart of most of their attacks. Both sides were reduced to 14 men before Dave Coady’s full-time whistle; first Ardclough corner-back Ben Redden was sent to the line for a second bookable offence and he was soon followed by Coill Dubh&#39;s Ryan Casey, who was also shown two yellows.

Leading by four points in injury time, Ardclough went in search of goals in order to improve their scoring difference and one came in the dying seconds of the game thanks to wing-back Eoghan Walsh but it wasn’t enough to prevent them from missing out on a semi-final place, despite a hard-fought and well-deserved win.