ATHY deservedly dethroned county champions Sarsfields to set up a mouth-watering repeat of the 2018 decider against Moorefield next Saturday, and having lost five semi- finals and two finals to Newbridge sides in ten years this win should give them huge confidence for that one. 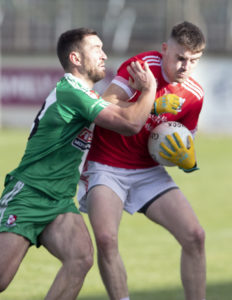 As good as Athy were, and it was a day when their star players stood up to the plate along with newer players such as Darren Lawler and Brian Maher, Sarsfields were surprisingly listless and out of tune in a bitterly disappointing display.

The champions shot some dreadful wides, particularly in the first half, while Athy looked fitter, more energetic and had in Niall Kelly the game’s most clinical finisher. His 40th minute goal was ultimately the difference on the scoreboard but anything other than an Athy win would have been a travesty.

Sarsfields’ lethargy contributed to a somewhat muted first-half in comparison to the earlier semi-final. Three early wides from Ben McCormack, Brian McDonnell and Ray Cahill set the tone and they went on to shoot five more in the first half alone. Athy were altogether more clinical.

Conor Hartley did give Sarsfields a 5th minute lead, but Liam McGovern equalised from a free off the post before Shane Doyle nudged Sarsfields back in front. By the water break Athy had gone ahead by a point with McGovern’s close range free and the lively Barry Kelly setting up brother Niall for his first point.

Athy were more direct than their labouring opponents and a good move between Lawler and David Hyland ended in the Athy and Kildare captain pointing. Their counter attacking from defence was a feature and Maher led the next successful one with Tony Gibbons taking a point when a goal was on offer.

Matt Byrne grabbed an important score from long-range for the Newbridge side but McCormack continued in a wasteful vein dropping one short before McGovern landed his third free to put Athy three clear.

McGovern missed a relatively straightforward free from the edge of the ‘D’ though and that encouraged Sarsfields to push on with Barry Coffey and a fine effort from Daragh Ryan pulling them back to within one point by half-time (0-5 to 0-6).

The first ten minutes of the second half would prove crucial. James Eaton won a forward mark that was easily within his range for a point and Niall Kelly screwed over a brilliant one from the left wing to give Athy momentum again.

Cahill got off the mark on 39 minutes with a free but a minute later Feely won dirty ball in front of his own goal and Athy broke swiftly down the left wing with McGovern and Lawler heavily involved in the move that led to Niall Kelly bearing down on goal and slotting the ball low to the net.

The gap was now five and that gave Athy the cushion and confidence they needed. As Sarsfields rang the changes in a desperate attempt to find a way back, McCormack finally found his shooting boots with a point but Feely won a couple of superb midfield marks, the second one paving the way for another fine Kelly point.

Sarsfields’ hopes were raised when Cahill pointed a soft enough free on 57 minutes and in the first minute of injury time Dan Nea punished another foul in the Barracks corner but Athy might have put the game to bed when McGovern missed a free from long range and Hughie Mahon led a break out from defence.

A frantic late Sarsfields search for an equalising goal ended with veteran Mick Foley emerging triumphantly with the ball to signal that it was Athy’s day at last.