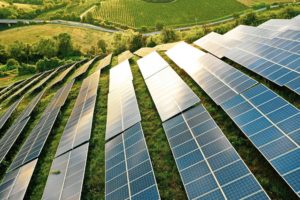 CO KILDARE will be the location for Ireland’s first commercial solar farm with the granting of planning permission for sites in Naas and Hortland.

Because of the economies of scale the larger, northern site which was successful in last month’s inaugural Renewable Energy Support Scheme (RESS) auction, will be the first to be constructed, most likely from Q2 next year, according to project manager Daniel Maloney. It will be located on a 100 acre site at Hortland, just outside Enfield.

“We’re delighted the Government has pulled their socks up and given this opportunity for developers,” said Daniel.

“Monread might take a little more time, but we will have the first commercial solar farm in Ireland in Kildare,” he confirmed.

The Monread permission for a 19 acre site just 300 metres from the Naas Ball was granted in a very rare ‘split decision’, with the actual array of photovoltaic (PV) cells getting the go-ahead, but with the applicant’s request to extend the operational life of the farm from 25 to 35 years denied.

This will require this farm to be disassembled entirely in 25 years time, unless retention is successfully applied for at that time.

So detailed was the application to Kildare Co Council that it included a 35-page ‘Glint and Glare’ report for the Irish Aviation Authority.

The solar farms are to be built by Irish firm BNRG Rewnables, who have been building such projects in Australia and the US since 2007.

Earlier this week, BNRG struck a new supply deal in the US state of Maine bringing its total investment there to €250m.

Since 2007 BNRG have been responsible for the solar powering of 22,410 homes globally, producing 150,000MWh to do so, and have plans for a ten-fold increase in this.

Unsurprisingly, Ireland has been slow out of these traps, but finally the technology has caught up with our watery rays, and is now commercially viable.

It is expected these pioneer plants will be the first of many such projects after the first contracts for the supply of energy from the sun to the national grid were announced last month.

A  total of 63 solar farms were included in the RESS auction, along with 19 wind farms, and an offer of connection to the grid must be ready by the end of 2022 to avail of the RESS.

It is expected at least 30 of these will make it to the grid, with at least two more of these belonging to BNRG.

“It’s a really good day for renewable energy. It’s been one of the slowest forming policies imaginable but we got here at last,” said David Maguire of the Irish Solar Energy Association

Climate Action Minister Eamon Ryan said the move put the country on the right path to achieving 70 per cent renewable energy by 2030.

“This will be crucial to Ireland’s contribution towards an EU wide renewable energy target of 32pc by 2030 and to the seven per cent per annum reduction in overall greenhouse gas emissions from 2021 to 2030,” he said.

The technology with PV cells has improved so much that four years ago, to provide the entire world’s energy requirement from solar power, would have required a total land mass equivalent to Spain.

Today that has been reduced to an area the size of Israel.