Leaning towards a Moorefield-Kilcock double, great news for Athy and Clogherinkoe

PHEW! Remind me next year to ask the editor for an extra page on semi-final weekend. Where to start? 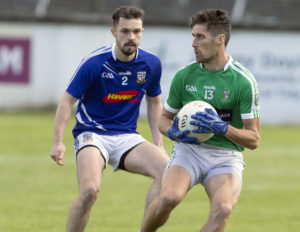 Moorefield’s Eanna O’Connor in action against John Costello of Celbridge in the SFC semi-final Photo: Sean BrillyHow about we work backwards? Kilcock v Leixlip in the second Intermediate semi-final was not a classic in terms of quality but for drama it would be hard to beat. What a goal by young McDermott to bring Leixlip back from the dead. People were raving about David Clifford’s goal on social media but to me the context and execution of McDermott’s made it even better. They still had to work to do, though, and Murphy’s equaliser was a thing of beauty too.

Having grasped a draw from the jaws of victory, Kilcock showed great resolve to come strong again in extra-time and were deserved winners. Their stylish citeóg Daragh McArdle was superb before his surprising substitution and again in extra time when recalled to the pitch. If he had a right leg, he would be unstoppable. You could almost hear his brain slapping down the pleas from his right foot as he veered across goal left to right at one point searching for any option other than to shoot with that superfluous limb.

The earlier game saw the romantic’s choice for the title, Clogherinkoe, make heavy weather of a game Ballymore Eustace side, but with Robinson, McMonagle and Nolan in such form in the first-half this should never have been a contest. Mark Barrett will have had nightmares on Sunday night, most of them involving a view of Robinson’s posterior scooting away into the distance.

Of course, Jack fell foul to the curse of the hammer, and while I hear he was determined to play on when he first felt it, his management surely should have whipped him off to preserve him for the final. He is the last person Clogherinkoe could afford to lose going into a first Intermediate final and to my mind swings the balance in favour of Kilcock, back in a final after three years away.

To senior then and two contrasting games in a way. Watching on Sash TV, which has come on a lot since the initial offering, it only seemed to dawn on co-commentator Frank Moran, doing his best Micheál O’Hehir impression, as we entered injury time that Sarsfields were possibly going to lose. Mind you, that gem of an insight about Chilli Byrne’s sister doing a strong line with his direct opponent Liam McGovern is what local coverage is all about.

I am in two minds as to how good Athy are. I will let you know next week. On the one hand, their big players really stood up to the mark. Niall Kelly is the forward of the championship (from play at least lest Moorefield fans get upset), Kevin Feely was catching ball like a man possessed and David Hyland will be picking pieces of Ben McCormack from his pocket all week.

On the other hand, Sarsfields were shocking, and I think it even took Athy a while to realise how uncooked the champions were. Sarsfields had enough possession and created sufficient chances to win another three county titles but they found every way not to score in a manner which reminded me of Kildare’s under-21’s against Galway in 2013.

The Newbridge side did not bring energy or intensity levels anywhere close to Athy’s, nor indeed to those in the earlier game. And that makes me wonder still about Athy’s chances against Moorefield, particularly when you consider they have not beaten a Newbridge side in a county final since 1937.

They had 19 attempts at scores on Saturday. How many will they manage against a Moorefield side who have not conceded more than 11 scores in any of their five games?

Moorefield themselves are a riddle wrapped up in a mystery inside an enigma this season. They are living off scraps in terms of scores from play as they struggle to find the right combination in attack. Almost half of their scoring tally has come from placed balls and with Éanna O’Connor and Adam Tyrrell around, Athy will have to be as disciplined as a Buddhist monk.

At the same time, Moores are leaking goals, with seven conceded en route to the decider (Athy have conceded four). But they were so disciplined in their tackling against Celbridge, who can moan about their own free concession all they like, and with some justification, but they played their own part in giving Henry Barrett decisions to make.

Of course, Moores had the Aaron Masterson affair as a motivational factor and I’ve no doubt they injected that hurt into their veins. I have seen some GAA injustices in my day but this one is right up there. Not only did video evidence support the red card being overturned but the player he supposedly struck, Cathal McNally went out of his way to attend both the Kildare and Leinster hearings.

Upholding the ban was the equivalent of convicting someone for the murder of a missing person who turns up in the court unharmed on the day. Are they calling McNally a liar?

I doubted Moorefield before the quarter final but on the evidence of the last two weekends I am not going to go against them on Saturday. No one player stood out head and shoulders above the rest. This was all about the collective, embodied by the hard running of the ageless Liam Callaghan and Kevin Murnaghan.

I thought Liam Healy was outstanding as well, despite getting caught out for Kelly’s goal. He did not give Kevin O’Callaghan a sniff.

The Celbridge story is turning into a horror show. A bit like Johnstownbridge they have a group of players who have suffered every shade of agony in county and club jerseys. Unlike Johnstownbridge, they have a panel strength that should have delivered at least one county title, but their main men failed to hit the heights once more against a Newbridge team and that now appears set to be their legacy.

I do think it’s getting to the point where the last visit to the well for the core of this Moorefield team is in sight, but I just have a nagging doubt about the virtue of Athy’s semi-final win given the mystery surrounding Sarsfields’ implosion. Athy allowed them 24 attempts and that would be enough to win most matches.

So, I am leaning, if a little shakily, to a Kilcock-Moorefield double at the weekend. Great news for Clogherinkoe and Athy!

Finally, I heard last week that Ellistown’s former Kildare star Andriú MacLochlainn suffered serious facial injuries as well as knee and ankle damage during last week’s match against Milltown. Andriú spent last week in hospital having surgery to his cheekbone. He tweeted about a “cowardly act” depriving him of the chance to play in his club’s relegation semi-final against Kilcullen, which they won. Presumably, something the County Board are looking into.

Best wishes to Andriú on his recovery.

The Supporter Column appears in the Kildare Nationalist each Tuesday