MOOREFIELD produced an archetypal Moorefield performance to progress to their seventh final in eight years as Celbridge came up short once more in a semi-final. 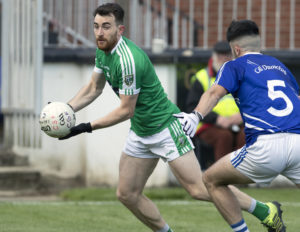 Ronan Sweeney denied that the controversial banning of Aaron Masterson was a significant motivating factor, the All Ireland under-20 winning captain failing to overturn last week’s red card at a Leinster Council hearing on Friday night but Masterson’s team mates called upon all their experience of winning tight games to prevail against a Celbridge side who may never have a better chance of quashing their Newbridge hoodoo having hit the front with a Mick O’Grady goal eight minutes from the end.

Referee Henry Barrett faced stinging criticism from the Celbridge supporters and the free concession statistics were certainly stark with Moorefield benefitting from more than three times as many as the North county men.

They definitely had cause for complaint but Moorefield would rightly argue that they were the more disciplined team. Indeed, their play off the ball was more impressive than when they had it. They scored only four points from play and only two of their starters scored.

It was a cagey opening and they reached the first water break at 0-2 apiece. Adam Tyrrell scored the first free inside two minutes before Celbridge got into their stride. Conor Plunkett recorded a fine score on the stand side and Paddy Brophy put them in front with a straightforward free.

Éanna O’Connor had a couple of bad wides as Moorefield struggled to find much rhythm but a free from close to the 45-metre line got him up and running to level the score.

Celbridge were dominant at the start of the second quarter with Fergal Conway, who was quiet enough generally, scoring on the turn. After Tyrrell pointed another free, Kevin Flynn strode forward for a point and Liam O’Flynn followed that with another after Masterson’s replacement David Whyte turned over possession.

That opened a two-point gap, but Moores hit a purple patch in the run up to half-time scoring four unanswered points, two each from Tyrrell and O’Connor, the latter grabbing their first from play on 30 minutes. That put them ahead 0-7 to 0-5 at half-time.

Defences remained on top in the third quarter with both teams managing just three points each, O’Connor getting all of Moorefield’s including one from play after a great turnover from Liam Callaghan. Brophy with two frees and McNamara’s ’45 kept Celbridge ticking over.

By now Celbridge’s frustration at the free count was eating into their confidence. Brophy sent a ball into Tom Kinsella’s hands and David Hughes shot a bad wide as they struggled to close the gap.

Moorefield substitute Niall Hurley-Lynch pushed the gap to three points before Aaron Browne, just off the bench himself, scored Celbridge’s first from play of the second half. He might have gone for goal.

In the 52nd minute, momentum swung Celbridge’s way. Mick Konstantin emerged with possession at midfield and his ball down the left wing was fielded by O’Grady above Liam Healy’s head. The county full-back had a clear run to goal and coolly beat Kinsella to give his side the lead.

That signalled a helter-skelter period with Celbridge defending for their lives but at the other end Kinsella made a game-changing save from Hughes’ goal bound effort on 58 minutes. They were soon rueing that with O’Connor equalising from a brought-forward free as the clock ticked into injury time.

A clumsy foul gave Tyrrell the opportunity to convert another close free on the right and after Flynn blazed wide for Celbridge, Mark McDermott coolly wrapped up the victory four minutes into injury time.

Same as it ever was.