IT’S been a busy few weeks for all involved with the U15 Klub Kildare National League team as we played catch-up with the rest of the teams in our group after the Kildare lockdown. With an already more condensed fixture calendar, our fitness and character were really put to the test with six games played across three weeks, four of those coming in the space of eleven days. 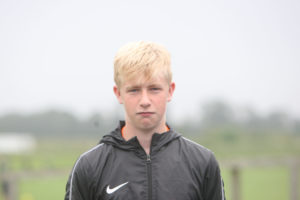 Add to that our training and gym sessions in between, not to forget coming back to long school days, you start to get a feel of the heavy demands on the players. But that’s why we play the game, sacrifice so much of our free time, keep ourselves in great physical condition, because we all love football. Nothing matches the pride of knowing that you’re the first team at this age group to ever represent your county at this level.

However, none of this comes without hard work both on and off the pitch.

Off the pitch, you’ve got to be strict on yourself, eat correctly, get enough sleep and work hard in the gym so that on the pitch you are putting yourself in a position to play as many minutes as you can, to get more people’s attention and ultimately help the team win. Easier said than done!

There are always going to be times when your name isn’t called out to start and it feels terrible on a personal level, as for many of us this wasn’t a situation, we’d have found ourselves in at our previous clubs, before we made the step up to League of Ireland.

There is never time to dwell on that though, because inevitably you will be called in and there is the chance to win your place back. This is the cycle that every player goes through and adapting to unforeseen circumstances has quickly become a priority.

Whether that’s a last-minute cancellation of a match, or changing tactics during the match, you can’t be thrown off your game if things aren’t going your way. Thankfully, as a team we have proved that we can overcome adversity, with no better example coming to mind than our game against Wexford in Ferrycarrig.

We had worked hard for a 3-2 win against the same side only four days previously and we knew we were headed for another tough, physical battle. Add to this, we had injuries for two players that were definitely felt in the first half as we trailed 1-0. We were facing an uphill task in the forty minutes that remained against a stern home opposition, but we fought back to win 3-1. It was the same story when we defeated Waterford 4-0 despite three absentees from the panel.

Despite the heavy load, all of the hard work and quality of the lads prevailed, as our most recent victory away to Carlow-Kilkenny on Saturday secured first place in our group, off the back of a five-game winning run. First place also guarantees qualification to the next phase, where the eight best teams get to compete for a place in the semi-finals.

However, there is simply no time to bask in the glory of your last win with the stakes so high.

We wouldn’t have it any other way!