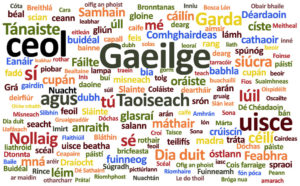 THE board of directors of Cill Dara le Gaeilge announced last week its intention to become the lead organisation for the greater Naas / Sallins area in relation to the local advancement of the Irish language.

Established in 2017, Cill Dara le Gaeilge aimed to support businesses in County Kildare that wish to conduct business through the medium of Irish. The group initially focused its efforts within the greater Naas area as the organisation had limited volunteer staff and resources. Many businesses in the area have expressed an interest in using Irish as a language of communication with the public. There is a Gaelscoil and Gael-Choláiste in Naas and the local Irish language community is exceptionally organised. A five year language plan for County Kildare for 2019 to 2023 has been published to formalise the revitalisation efforts for the Irish language in the area and in the county.

Kevin Myers is back with a bang