CLOGHERINKOE made heavy weather of it at times but deservedly advanced to their first Intermediate Championship final after an exciting battle with Ballymore Eustace. 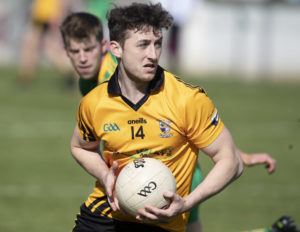 Clogherinkoe’s full-forward, Cein McMonagle wins possession during the IFC semi-final against Ballymore Eustace Photo: Sean BrillyThere was no disgrace in defeat for last year’s Junior champions but Clogherinkoe ultimately had the more dangerous forward division and they defended superbly throughout.

Manager Ronan Quinn will feel it should have been a lot more comfortable. If they had been more clinical and built up a bigger lead, they might not have felt the need to keep a clearly struggling Jack Robinson on the pitch for as long as they did.

Robinson later pulled up with what could be a serious hamstring injury and must make him doubtful for the final.

The talented young Kildare forward was instrumental as Clogherinkoe’s inside forward line threatened to run riot in the opening half. Robinson had the beating of Mark Barrett and kicked four points including two frees while the lively Mark Nolan fired over three from play. Full forward Cein McMonagle weighed in with two more with Ciaran Gravin and Daniel Grehan also on target as they went in at half-time with a 0-10 to 0-5 lead.

But Ballymore had been gritty in the second quarter to keep the gap to five points at the break. The two Murphys up front carried the fight with Niall grabbing a great point from their first attack and going on to add two more from play in the first half.  Simon weighed in with another and Tadhg Barrett was the other man on the scoresheet.

Clogherinkoe’s inaccuracy in their forward division heading to half-time had helped the side from the Wicklow border keep in touch, the most significant miss coming when McMonagle was foiled by former Kildare outfield star Tommy Archbold in goal.

Nolan registered his third point straight after the break but it still did not really settle them. Robinson, McMonagle and Gravin all missed decent chances before substitute Eoghan McMonagle brought an end to the sloppiness with their twelfth point.

Simon Murphy had an early second half score for Ballymore but they needed a goal and Grace provided it on 40 minutes. Stephen Dwyer’s high ball was fetched by Niall Murphy and he put Grace in to slide it under Keith Wilkinson.

Clogherinkoe got more and more nervy and missed a couple of goal chances that would have put the game to bed, but they were solid in defence and that laid the foundation for them to hold on.

Immediately after the goal, Ballymore had Clogherinkoe rattled but they failed to capitalise and Eoghan McMonagle raised the siege somewhat with a brilliant 46th minute point. Simon Murphy made it 1-7 to 0-13 before Robinson limped out, and Clogherinkoe failed to take goal chances when Daniel Grehan ran out of road and ideas and then Eoghan McMonagle had a shot blocked by a defender.

With nerves fraying the game went through 12 scrappy and scoreless minutes. Ballymore went down to 14 men when Shane Barrett picked up a second yellow following a bout of fisticuffs. Niall Murphy scored a free in the first minute of injury time to bring the gap down to two but after Cein McMonagle butchered a two on one chance by shooting tamely at Archbold, Gravin sealed the win with a free.

It’s been a tough road for Clogherinkoe with five games in four weeks and they’ll be hoping their talisman Robinson can make it, but they’ll be eager to take full advantage of the opportunity in front of them and clinch senior football for the first time.