AFTER a breath-taking game that had everything, except, thankfully, penalties, Kilcock deservedly edged over the line against local rivals Leixlip to set up a meeting with Clogherinkoe in Saturday’s Intermediate Final. 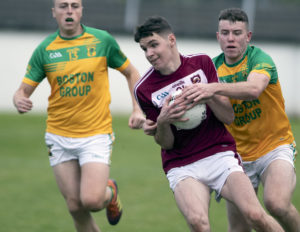 Darren McDermott of Leixlip, who scored a cracker of a goal, breaks through the challenge of Kilcock’s Jason Gibbons in the IFC semi-final in Newbridge Photo: Sean BrillyThere was controversy, a contender for goal of the season sparking a dramatic Leixlip comeback in normal time, a fascinating midfield battle and of course, extra time.

Kilcock had to win this game twice. They generally held the edge in normal time and when they went four points ahead in the first minute of injury time they looked home and hosed. But Darren McDermott summoned his inner David Clifford to hit a brilliant shot across goalkeeper Ciarán Heneghan and inside the left post from all of 20 metres.

Kilcock panicked a little from the kick-out and substitute Cian O’Sullivan fouled Tommy Moolick near the terrace sideline giving Eamonn Murphy a shot at the posts to level things.

Often, it is the team that gets out of jail that pushes on in extra time but Kilcock steadied themselves and fought off another late charge to emerge three-point winners. Moolick against Ciarán Murray was a fascinating battle and, while the Kildare player scored three points, the son of Donegal All Ireland winner Brian stuck doggedly to his task and was a critical component in the win.

Kilcock, with David Duke superbly orchestrating the attack, ultimately had the better spread of match-winners who almost took it in turns to keep the scoreboard moving. Shane O’Rourke and Daragh McArdle were brilliant in spells and the classy Daniel Courtney weighed in with three points, while substitute Eoin Mulhall produced a brilliant cameo.

A big talking point was Declan Gibbons’ decision to withdraw McArdle four minutes from the end of normal time with Kilcock just three points ahead and having earlier taken off sharpshooter O’Rourke.

There may have been a fitness issue, and he could argue that Mulhall’s four subsequent points justified the decision, but it was a curious one nonetheless and may have haunted him if Leixlip had prevailed in extra time.

Leixlip had made the better start to the game with Murphy particularly prominent but by the water break McArdle had three points on the board as Kilcock led 0-4 to 0-3. They then kicked four points in the last eight minutes of the half, three of them in a purple patch from O’Rourke, with just a Moolick special in reply. At half-time they led 0-8 to 0-4.

The third quarter was shaded by Leixlip and while they brought the gap back to three points (0-8 to 0-11) they also squandered a couple of goal chances as the action became frenetic and Kilcock, and Courtney in particular, mislaid their shooting boots.

Murphy and Paul O’Brien exchanged points before we had thirteen scoreless minutes bringing us into injury time before Mulhall’s superb point from the left-hand side seemed to clinch it for Kilcock. Leixlip had other ideas.

Ronan Fitzsimons’ brilliant score put Leixlip ahead in extra time but two frees from Mulhall edged Kilcock back in front by half-time (0-15 to 1-11). Moolick thought he had equalised but the referee and linesman over-ruled the umpires. To be fair the ball looked wide from the press box.

Bodies were cramping up all over but Kilcock found the extra energy. Courtney put them two up, McArdle returned to the fray to profit from a great run by Findlay Nairn and Chris McCarthy pushed them four clear.

Back came Leixlip again with Murphy’s free from nearly 45 metres and then Moolick blasted over the bar as Kilcock got edgy once more.

The final word went to Mulhall though as he fisted over the final score after nearly 90 minutes of enthralling action.