Athy or Moorefield, a county holds its breath!

CAN we get back to the on-field action  after all this week’s  off-field stories, non-stories, confirmed and unconfirmed reports and actions, comments and no comments?

This Saturday sees the culmination of a lot of hard work by Co Board Officials, the Kildare CCC, Volunteers, Club Officials, Players, as well as the patience of club and neutral supporters who were unable to attend the games.

Let’s again pay tribute  also to Co PRO, Christine Murray, who despite all the restrictions has managed to produce on line Team Sheets for each of the championship games this year. Tribute to the Club PRO’s who would obviously have facilitated this.

Yes there were a few false starts through lockdown and restrictions and the possibility of a Christmas final was touted on one occasion but here we are at the Blue Riband of the Joe Mallon Renault Kildare Senior Football Championship with the Dermot Bourke Cup up for grabs.

There is no doubt that both Saturday’s finalists, Moorefield and Athy, are there on merit, in this a repeat of the 2018 final which was won by Moorefield.

They were members of the “top four”, which included defending champions, Sarsfields and Celbridge, who were tipped to make the final.

Moorefield were their usual resilient selves on Saturday last in overcoming Celbridge when they refused to panic when Celbridge goaled inside the last 10 mins. In fact it was Celbridge who seemed more panicked by the score that the former Leinster champions.

Contrast that with Athy who, when they scored their goal, an excellent one from Niall Kelly, continued to play the game in the same way as they had played earlier and benefitted accordingly.

Moorefield will welcome back Aaron Masterson following his suspension for last Saturday’s semi-final, which will provide a selection headache for Moorefield Manager, Roli Sweeney, one I’m sure he will relish.

Moorefield epitomise all the spirit and determination of their manager and those traits are embodied on the field of play by team captain, Kevin Murnaghan. A bit of an Alex Ferguson/Roy Keane combination, without the breaking of cups!

Eanna O’Connor and Adam Tyrrell have been the score getters for Moorefield, they’ve scored 0-61 of their 4-80 championship total to date. Of course Moorefield supporters, and management, will surely say if the lads out the field weren’t doing the business then O’Connor and Tyrrell would not have the opportunities from play or from frees. In addition there was a spread of 14 other scorers in the five games played in Championship 2020.

Athy came through the Group stages quietly, effectively and convincingly, even if they needed an injury time recovery to overcome Clane in Round 2. Perhaps that “fright” might have stood them in good stead for the remainder of the championship.

Under Manger, Vinnie Walsh, involved with the team in various roles for three years now, Athy are playing a more purposeful, attacking game with half backs, captain, David Hyland, who lets his football do the talking, and Brain Maher, breaking at speed to augment the ball winning capabilities of Kevin Feely, having his best season for the club in a while, and Paschall Connell.

It is up front that Athy hold many aces. Niall Kelly, back to his best form, James Eaton and Liam McGovern have notched up 2-43 of the championship total of 5-73. When you add in another 1-5 apiece from Conor Ronan and John Moran from the remaining 11 scorers then you can see the formidable attacking threat that Athy carries.

These are all figures on a piece of paper though and games are never won on paper.

Moorefield will be favourites and their experience of the big day gives them that right to be favourites. Their ability to defy all odds, distractions and adversity as well as their custom of playing to the final whistle and beyond make them extremely dangerous opponents.

They are now mixing experience with a great blend of youth in a team that has moved seamlessly from the loss of some mighty players over the last two years. Mark Dempsey, Liam Healy, Liam Callaghan, Ian Meehan and David White are in that mix.

They play to a system, a plan, a process that is effective and difficult to break down. They don’t do panic either.

Athy are probably now benefitting from the success of the minors and U21’s of a the last while who have now matured, but they are also benefitting from having a fit and available county contingent available to them. Into that mix you cannot underestimate the experience and know how of Mick Foley, a colossus at centre half back this year.

The expectation is that Moorefield are on target to win their 11th title but just as we warned in respect of Sarsfields last weekend they will have to have their “A” game on duty on Saturday. Any less that than or any chink in the armour will be exploited and punished by Athy to capture their seventh senior title.

You have been warned!

Our Photographer, Sean Brilly, has captured the main players in Saturday’s Final, the Managers and Captains while our Reporter, Richard Commins, has produced the Paths to the Final and Scorers for each team. 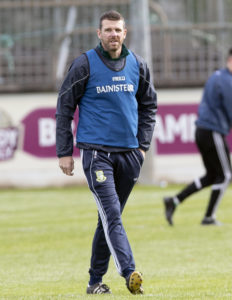 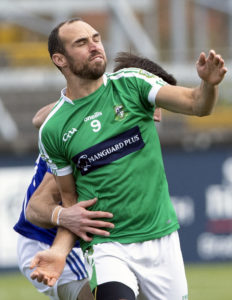 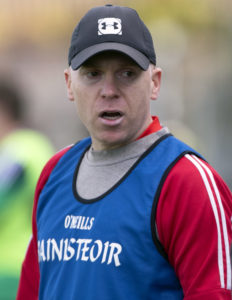 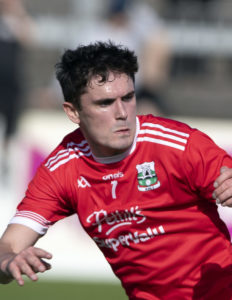