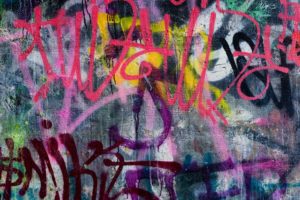 “I’VE spoken with property owners, young people, and teachers. This could be the most inter-generational project ever done in the town,” said Cllr Chris Pender, as he began to re-start his project to organise a number of graffiti walls around Newbridge.

After having some incidences of graffiti reported to him recently – which he helped tidy up – the councillor was reminded of his previous initiative in March when he put a motion to the council executive seeking such a wall, a move that did not fall on deaf ears.

“It does bring to mind that perhaps this tagging and random spraying wouldn’t be happening if we used to blank spaces in a positive way,” said Cllr Pender.

“It brings to mind the motion I brought forward not too long ago on behalf of my work experience student in relation to a graffiti wall or art pieces throughout the town to brighten things up,” he reminisced.

“I’ve approached a couple of private property owners and it looks like we have some walls lined up to get some nice pieces onto wall around Newbridge,” he revealed.

“Apart from a couple of naysayers, everybody is in favour,” he pointed out.

“I’ve spoken to a couple of members of the Defence Forces, and they’d love to be involved with a project like this,” he revealed.

“It could be of massive benefit to the town of Newbridge,” he said.

“Everybody agrees Newbridge is a lovely town, but it can be a bit beige,” suggested the councillor.

“A pop of colour won’t go amiss, nobody’s going to get hurt,” he said.

However, according to the county’s Arts Officer, Lucinda Russell then: “It would be more advantageous to work with the Joint Policing Committee (JPC) to identify a group of individuals who are engaged in graffiti or at risk of anti-social behaviour in a project around street art with an established street artist.

“This would not necessarily lead to a graffiti wall, as the emphasis would be process [rather than location] based,” she explained.

“The establishment of such a wall should be discussed with the Urban Regeneration team for Newbridge, the local Tidy Towns committee and other interested parties,” she told Cllr Pender then.

Cllr Pender has faced some criticism on his Facebook page this week about this idea which accused him of “pandering…to an act of anti-social behaviour”, although still gave him “credit where it was due” for his removing graffiti on Cutlery Road.

“I’ve worked on multiple different graffiti and street art-based projects that have had a benefit far beyond the aesthetic.

“Projects like this – if done properly – and in conjunction with the community, local businesses and artists, can have far reaching benefits from a social and community involvement point of view,” said Cllr Pender.

“This idea that it’s an anti-social thing, it’s not,” said Cllr Pender.

“In fact, studies from both the policing and community development perspective have shown that where graffiti or street art projects have taken place, impromptu tagging and slogan-based graffiti has drastically dropped,” he added.

“If you’re an artist and would like to get involved or a property owner that would let us use your wall for an exciting piece then please get in touch,” said Cllr Pender.