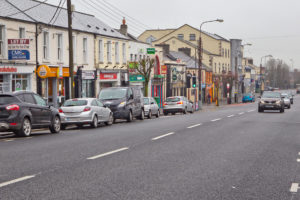 ANOTHER mid-Kildare charity is in dire straits as the lease on its Newbridge premises expires next Wednesday (14 October) after six years.

‘HOPE(D)’ – a mental health charity that has looked after around 800 people a year at its Henry Street premises – has launched a ’25 Grand in 25 Days’ in an effort to fund the search.

“This would allow us to jump on a premises immediately if it comes up,” said spokesperson and counsellor Terri Thorpe, “but I don’t know where we’re going to be”.

“Remember the thousands who came through our door and we helped? Well, now we need the help,” she said quietly.

Helping Other People Escape Depression (HOPED) was set up in 2003, and has been at its present premises since 2014, but were given notice recently, after the landlord’s circumstances changed and the property was put on the market.

“We’re faced with finding a new home, and the time is getting tight,” said Terri.”I have visions of us with all our possession out on the street like a Famine family next Wednesday!” worried Ms Thorpe.

Like so many other hand-to-mouth charities, this year has bled them bad.

“Covid has penalised us to the tune of €50k [in fundraising] since February,” said Terri.

She began to explain a bit about her charity – which receives “no Government funding”.

Last year it had clients aged between 13 and 78, and it provides trained counsellors offering a “quality service” of at least 10 one-hour consults each, which “can be extended, depending on the individual”.

“Everybody is respected according to their own individual circumstances, whether its from a bereavement, or a change of work, or suicide ideation,” she explained.

HOPE(D) also offers one-to-one consultations and does outreach work in schools in the region, as well as providing holistic therapies like reflexology and Reiki through its 22 volunteer staff.

“We have saved thousands from suicide over the years. We are the frontline of support in the area,” she stated.

“Local GPs, Lakeview, Kildare Town Mental Health Services, most of our referrals come from GPs and the HSE,” she pointed out.

“Ours is the only service in south Kildare open for face-to-face psychotherapy sessions,” said Terri.

“We have started looking to get a secure premises, but there’s not many and the cost is horrendous,” she explained.

Because of the range of services offered, HOPE(D) would hope to acquire a property to facilitate six consulting rooms, a group therapy room, a holistic therapy room, a board room, a drop-in room, as well as office, kitchen and canteen facilities.

“We are appealing to anybody who has, or knows of premises available,” appealed Terri.”We can’t be fussy at this stage, and have to take what is offered,” she admitted.