ATHY’S “Golden Generation” put nine years of pain behind them with a thoroughly deserved seventh Kildare Senior Football title at St. Conleth’s Park on Saturday, in doing so breaking the Newbridge stranglehold on the trophy since their last victory in 2011. 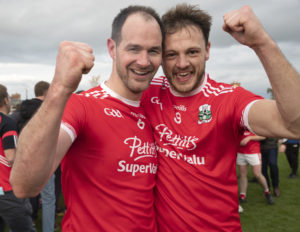 For Moorefield it was a second successive year to fall at the final hurdle but they owe their supporters nothing at this stage.

The script looked too familiar at times. Athy played with a strong wind into the Kilcullen end in the first half and enjoying almost total midfield dominance should have been a lot further than three ahead at half-time.

They suffered a hammer blow with talisman Niall Kelly going off injured on 40 minutes and that seemed to signal the turning point as an ominous six-minute spell immediately afterwards saw Moorefield resume normal service and fire over four points without reply to edge into the lead for the first time.

Having lost to Moorefield in each of the last three years, this had Groundhog Day written all over it. But someone flicked a switch and the alternative fairy tale ending played out instead, much to the delight of the Athy “Ultras” on the barracks terrace.

The key cast members in a memorable last fifteen minutes were all on board the last time they lifted the Dermot Bourke Cup. Danny O’Keeffe was an inspired choice to replace the stricken Kelly, firing home the goal that kick-started their second wave. Kevin Feely, any doubts about his fitness cast aside these last two weeks, covered every blade, and took some trademark catches.

But Mick Foley was a popular choice as man-of-the-match. Captain nine years ago, he threw his body around with the abandon of a lamb in springtime, determined to bookend his career with that cup.

Two cameos defined the performance. First, he dived full length to fingertip an Éanna O’Connor pass to Feely 30 metres from his own goal. The second, with the game five minutes into injury time, would have struggled to pass the Hollywood sniff test. Kevin Murnaghan launched a high ball into the towering Aaron Masterson at the edge of the small square craving the goal that would steal it.

Despite giving away four inches and fourteen years, Foley soared into the skies to grab the ball and seal his legendary status in the south county town. It was the final act with Niall Colgan immediately blowing for full time.

Moorefield can rarely have been dominated as they were in the opening period when Feely and O’Connell ensured there was a constant flow of traffic towards the Kilcullen end. Goalkeeper Tom Kinsella had a nightmare trying to find a colleague from his kick-outs, which went long every time when some variation might have found a way out of the trap.

Athy turned over the Moores kick out 12 times out of 15 in that first half.

After eleven minutes they were four points ahead. James Eaton, looking fit as a fiddle this year, was a willing target man and he opened the scoring with a mark after five minutes. He then converted a free from 40 metres towards the terrace sideline before being fouled himself for Liam McGovern to stroke over their third.

Moores had hardly touched the ball at this stage and it got worse for them when captain David Hyland was fouled and McGovern made it four points to nil.

Éanna O’Connor was wide from Moorefield’s first shot after 12 minutes and by now Jason Phillips had been summoned to midfield. It was another five minutes before corner back Seán Dempsey opened their account.

Athy were becoming wasteful and would only score once (Niall Kelly’s free) between the 11th minute and first-half injury time. Kelly, normally so accurate, was having a poor day from play, shooting three wides in that period. In all Athy had nine wides in the half and the suspicion was they would regret it.

Slowly but surely, Moorefield had spluttered to life. O’Connor converted a 24th minute free and they then squandered one of their three goal chances when the overlapping Liam Callaghan was played in by a wonderful flick from O’Connor but blazed wide.

In injury time, Kelly finally found his range with his and Athy’s only first-half point from play to put them 0-6 to 0-2 ahead. Before the break, Cian O’Connor punished them for spurning two chances to clear, however, and Moorefield were within three at half-time, and probably happy that they were that close.

After Masterson scored a beauty from outside 45 metres, Moorefield passed up their second goal chance. Again, Éanna O’Connor was the provider but this time Ciarán Kelly struck the post with James Roycroft beaten.

The workaholic Barry Kelly settled Athy with a point straight away to restore their three- point lead but O’Connor used the wind to his advantage to put over a free from all of 48 metres.

With the game now an absorbing end-to-end affair Niall Kelly picked off another point after wriggling free of two tacklers on 35 minutes and when the relatively quiet Adam Tyrrell put Éanna O’Connor through on goal Roycroft pulled off a fine save down low as the Moores third goal chance went the way of the previous two.

When Kelly departed though, it was like a balloon deflating. Niall Hurley-Lynch, on as sub, scored a mark and from the kick-out Cian O’Connor won possession and Tyrrell scored from the left. In the 47th minute, the two O’Connor brothers combined with Éanna applying the final touch to level it at 0-8 each. The same man put the Newbridge side ahead for the first time four minutes later.

Athy substitute Kieran Farrell broke the sequence with an important point to level it but Éanna O’Connor was back again for third point from play on 52 minutes.

With seven minutes plus injury time left, O’Keeffe etched his name into Athy GAA history. A ball down the right from Feely was superbly flicked backwards over his shoulder by Eaton and O’Keeffe made no mistake from a move almost identical to Callaghan’s miss earlier.

With Cian O’Connor red carded for two yellows a minute later, Athy just needed to manage the game now. Feely put them three ahead on 55 minutes with a free and after Mark McDermott pulled it back to two, a great Feely mark was a statement of intent before O’Keeffe produced another moment of inspiration with a superb point.

Foley’s diving interception on 59 minutes broke up a good attack but Tyrrell found the range with a big point from the right-hand side after Feely had hit a post. Cian Reynolds then did the same from a fisted effort. McDermott then shot hastily under pressure from that man Foley.

Moores went in search of one last miracle but Foley’s salmon leap signalled a famous victory for Athy.