CLOGHERINKOE shrugged off the absence of star forward Jack Robinson to claim their first ever Kildare Intermediate Football Championship after a breathless final against Kilcock on Saturday. 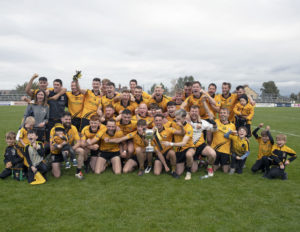 The north west Kildare outfit, whose last experience of senior football was when they combined to form St. John’s with Johnstownbridge in the 1970’s, have been knocking on the door the last couple of seasons and with the guidance of Ronan Quinn on the sideline there was a real sense that they weren’t going to go home without the Hugh Campion Trophy.

Where Clogherinkoe had strong performances all over the field Kilcock were reliant more on individuals, particularly the excellent Shane O’Rourke who shot six points, while Darren Acton was an excellent target man and Jason Gibbons did his utmost to wrestle midfield away from the Grehan brothers.

In some ways it was a strange game. Kilcock had the strong wind in their favour in the first half and when they shot, they scored. The trouble was they only shot seven times. It was enough to put them 0-7 to 0-6 ahead at the break, but Clogherinkoe had overcome a nervous start to win a lot of possession as the half wore on.

The second half ebbed and flowed brilliantly with referee Brendan Cawley taking a benign view of a lot of the challenges, and picking a winner was a hazardous occupation. They were level at 0-9, 0-10 and 0-11 apiece before Clogherinkoe, who hadn’t hit the front until the 56th minute, found their scoring boots to score three inspirational points from play in three minutes as the game crept into injury time.

Try as they might, Kilcock, beaten in the 2017 decider by Raheens, could only manage two more points before Cawley signalled Clogherinkoe’s elevation to the senior grade.

Kilcock had looked strong in the opening quarter with Ciarán Murray looking dominant at midfield and the talented O’Rourke kicking points for fun. Murray scored from a mark to open their account in the first minute and then O’Rourke fired over his first point a minute later.

Cein McMonagle, who endured a mixed time against the wind but came up trumps later on, won and converted the free that gave Clogherinkoe their opening score but after O’Rourke’s free had pushed Kilcock two clear on 6 minutes, Cloghs went through a frustrating spell when the wind played havoc with every shot.

Mark Nolan, who along with McMonagle helped to mitigate the loss of the hamstrung Robinson, broke their scoreless spell with their first point from play, only for Acton to swing over a superb effort from the left wing for a Kilcock side who could not miss at that stage.

O’Rourke’s point on 19 minutes gave Kilcock a three-point cushion but Gravin pointed a free from the right before corner back Luke Sheridan pointed a magnificent effort. Clogherinkoe were gaining a stranglehold on midfield as we headed towards half-time and Mark and Daniel Grehan strode forward for inspirational points before Nolan made it three in three minutes to equalise at six points apiece.

There were shades of Carlow’s shooting against Kildare in 2018 about Kilcock and you wondered might their name be on the trophy when an off-balance Acton miraculously found the range to conclude the first half scoring with his team ahead by a point.

The early second half exchanges seemed to confirm that thought as O’Rourke sent them three clear with two classy points, the first fashioned by the influential Gibbons, the second from a superb crossfield ball from Acton. The latter attempted to turn finisher from the next attack but he shot Kilcock’s first wide of the game.

Cloghs were behind again but looked resilient. Aeden Boyle sent captain Gavin Scanlon in on goal and he was hauled to the ground just outside the penalty area. McMonagle pointed the free.

Kilcock were playing a patient game against the wind but when O’Rourke’s wide ended one period of cat-and-mouse McMonagle narrowed the gap to a point with an excellent 30 metre free on the left.

Wing back Killian Galligan then burst forward for a rousing equalising point just before the second water break and it was all to play for at 0-9 each. Young substitute Eoin Mulhall pointed a close range free to send Kilcock ahead again but with six minutes left on the clock McMonagle set up Gravin for a point off the inside of the post.

Nolan scored a superb point from the left to give Clogherinkoe the lead for the first time but the to-and-fro went on as David Duke pointed for Kilcock from the right.

The official man-of-the-match McMonagle stepped up to the plate in the final few minutes and it was he who edged his team back in front with a beauty from the left-hand side. When Seán Nolan then hit a marvellous point on 59 minutes the Cloghs fans started to believe. A calm point from McMonagle (again off a post) and the roof was raised despite the restricted attendance.

Gibbons scored a point to narrow the gap to two a minute into injury time and O’Rourke took a point from a 13-metre free when perhaps he could have attempted a “Rob Kelly” goal attempt. That proved to be Kilcock’s last chance as Cawley signalled the end of a long, long wait for Cloghs.