Two fascinating football finals as my predictions helped the underdogs

THE people of Athy and Clogherinkoe owe me a huge debt of gratitude. While my prediction of a Moorefield-Kilcock double was more a shaky leaning than a firm conviction, the pair of underdogs lit up St Conleth’s Park on Saturday to win two fascinating finals. Fully deserved too, in both cases, despite the closeness of the scorelines. 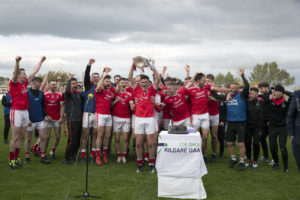 In a way, calling Athy underdogs underlines how little they’ve harvested from their great underage teams from the turn of the last decade. It would have been a travesty if players like David Hyland, Kevin Feely, Niall Kelly and James Eaton didn’t add to their 2011 triumph. Same for the old stalwart Mick Foley. No doubt winning it by beating the two Newbridge teams will add to the satisfaction for Vinnie Walsh’s men. And so it should.

There can be no arguments. Athy needed two things against Moorefield. Firstly, no repeat of the early goal concessions that have left them playing catch-up in the past. Secondly, their marquee players named above needed to really take this game by the scruff of the neck.

Their start was a force of nature and left little doubt that Moorefield were in trouble. I know the wind was against them but I’ve never seen Moorefield so overrun as they were in the first quarter. It was the Johnstownbridge template with knobs on. They absolutely obliterated Moores at midfield during that spell.

Athy have one of the game’s cleverest analysts in their backroom team, James Robinson (aka Dontfoul on social media), and you can just imagine him beaming internally as time after time Tom Kinsella kicked long down the grateful throats of Feely, Paschal Connell and Foley.

It was his sixth kickout before he found a man in green and it didn’t improve much as the half progressed. Meanwhile, Athy custodian James Roycroft found friendly arms with his first five kick outs.

The scoreboard however, steadfastly refused to move at any pace for the dominant south county men. For a moment I wondered had the temperamental Hawkfield version been installed at headquarters.

With that amount of possession and the wind behind them to score only one first half point from play and six in all suggested, let’s be honest, another one of those days for Athy.

Moorefield would surely stir themselves and when they did, they wouldn’t be as wasteful with Éanna O’Connor around. Sure enough, they were within three points at half-time despite only getting their first score 17 minutes into the game when Seán Dempsey bounced one over off the crossbar.

Niall Kelly was going through his own personal hell in that first half. In the form of his life so far in this championship, all of a sudden his kicking boots were full of jelly, his compass banjaxed. When he broke free with no one between him and Kinsella he was so desperate to get a point from play to his name he eschewed the goal opportunity that might normally have been his priority and took his point.

Having played himself into the game and kicking one fine second-half score, Kelly’s day would hit the buffers with that serious looking injury. At that stage Moorefield were already proving more competitive but had missed three goal chances and still trailed by three. They gained energy from Kelly’s bad luck and they relentlessly reeled in Athy and then pushed ahead by a point with O’Connor typically brilliant.

Three moments will stick in the memory and go down in folklore in Athy as they refused to follow the script.

Firstly, the Danny O’Keeffe goal, the game changer, beautiful as much for Eaton’s flick as for O’Keeffe’s finish. Worthy of winning any game. Foley owned the last five minutes of this win, though. His first intervention was that heroic full-length dive to intercept O’Connor’s pass. Lev Yashin in his prime (look him up kids).

Then, when Kevin Murnaghan launched a Hail Mary towards the Athy goalmouth with the towering Aaron Masterson positioned accordingly, you felt any touch from the Moores man would have delivered the ultimate rebuke to the authorities after his semi- final ban.

Foley needed a few seconds to throw on his Superman vest and made the necessary call to air traffic control, before launching himself skyward, soaring above the 6’5” Masterson and re-emerging from the clouds with the ball in his paw. Now that’s an All Star. Game over.

I’ve watched the Intermediate final three times now (the things I do for you) and came up with a different man-of-the-match each time. Initially, I’d have gone with the official choice Cein McMonagle who came up with some brilliant scores just when they were needed.

On second viewing I watched Ciarán Gravin more closely and his intelligent work around the middle helped the brilliant Grehan’s wrestle control away from Kilcock. On a third watch, I could make a case for the captain Gavin Scanlon, rock solid defensively and almost won a penalty with one surge forward.

What that tells me above all else is that this was a team effort. Jack Robinson’s injury was a severe blow, some of us thought a terminal one, but the fifteen starters and four subs re-doubled their efforts and there wasn’t a player among them who under-performed.

Kilcock may have suffered from the slog of extra-time against Leixlip, although Clogherinkoe too have had a heavy schedule. It looked like Ciarán Murray, listed in the programme as 6’8” was going to be the key figure early on but he didn’t have the legs for the Grehans who are superb athletes.

They also didn’t get enough from their half- forward line, relying too much on Darren Acton and the superb Shane O’Rourke for scores.

The Clogherinkoe story is one of those great fairy tales that sport throws up. When I was a youngster (yes, games were in black and white), they and Two Mile House would have been two of the smallest clubs in the county in terms of playing size and achievements.

It’s remarkable that the last three years have seen both as Intermediate champions. The North West of the county produces quite a talent stream for such a small, rural area. We will now have three teams in senior from that small corner with Clogherinkoe joining Carbury and Johnstownbridge. The latter two are within 10km’s of Cloghs ground.

I suppose it’s a strong argument against my previous suggestion that we reduce senior to a maximum of 12 teams. It would make stories like Saturday’s so much less likely. I was downbeat earlier in the championships as teams shipped heavy defeats but as the cream rose to the top in both grades, we had an exhilarating few weekends from the semi-finals onwards. That’s testament to all the clubs involved in these trying times.

Speaking of which, I am not sure at the time of writing if the hurling decider will take place next weekend. If it does, it’s hard to see beyond Naas retaining their title. Confey’s win over Celbridge surprised me a little – what a bad week for Celbridge – and Naas were very comfortable winners over Confey in the group stages. Hopefully that game goes ahead. Confey can take heart from my predictions last week.

The Supporter appears in the Kildare Nationalist each Tuesday