ATHY’S Hilda Breslin is to be the next President of the Camogie Association, after being elected to the role at their Annual Congress, which was held virtually for the first time on Saturday. 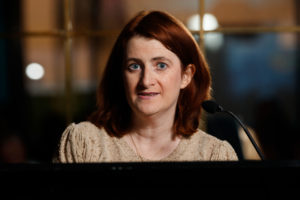 Delegates tuned in across the World via Microsoft Teams, but some were socially distancing in Croke Park in three separate meeting rooms, with Hilda celebrating with Connacht Chairperson Geraldine McGrath. It was a somewhat surreal experience.

“It wasn’t the traditional way,” Breslin told the Kildare Nationalist.

“I felt sorry for Geraldine, because she was going to get the brunt of it! There was just the two of us because we were socially distancing, as some of us had been brought to Croke Park. I’ve celebrated with my family, but even that, in a sense is difficult, because some of them are in Dublin, and some of them are in Athy, so you’re not even all coming together.”

The Athy native went on, “I suppose it’s difficult, it’s not the traditional celebration that you have, but then I think, I’m not sure I would have managed Congress and the whole fuss and everything at that, that was also going to be equally difficult. In some ways, giving your speech to a screen where you really couldn’t see anybody, just made it that little bit easier that I could get through it.”

Six days after Athy’s Kildare SFC win, it was another win for the South Kildare town with Breslin’s election. Indeed, the club also reached their first Intermediate Camogie final, due to be played last Sunday, but a halt was called to all club Gaelic Games.

“There was a great excitement around, we were going for a clean sweep,” Breslin said. “The Camogie club is a young club in so many ways, but we’ve had a huge tradition. Camogie was first played in Kildare outside Athy. We then drifted in and out, and the club was reformed about 15 years ago at Adult and Underage, and it was about growing it then.”

Breslin is keen to see her elevation to President as not just an indication of her work personally, but that support structure around her and the sport at all levels over the years.

The former Kildare Camogie Secretary was thankful for the support she had received. “I have enormous friends in Camogie and they’ve all supported me and they’ve shored me up at moments when I thought, ‘Hmm, this is just getting too difficult. They focused on why I’ve wanted to do this. I suppose to me, it was about them.”

Breslin admits it was unfortunate that all those who supported her over the years, couldn’t be present, but hopes that they will be able to celebrate with her when she takes charge next April.

The President elect concluded by saying, “We’ll have next year’s Congress hopefully and all of those people will be there, and they’ll still be there to be thanked. They’re still very much part of this. The main thing I would say to all of those people is that they’re not running away anywhere, because if I needed their help previously, I definitely need it now!

I certainly will be needing more assistance, so if they felt their journey was over, it is definitely only just beginning for them!”