Where is the impact from the All Ireland winning U20 team

The Supporter reflects on the Kildare Senior Squad

YOUR heart would go out to them. The senior hurlers of Naas and Confey. The intermediate and minor hurlers. The minor, reserve, and junior footballers. While the nation’s attention shifts to National Leagues and All Ireland Championships (“Elite” sport), the kids, second class sporting adults and recreational players must kick their heels in Level 3 limbo. 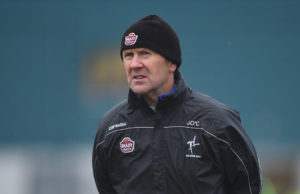 We might blame the Blackrock supporters in Cork for their self-indulgent celebrations but it was happening nationwide. Look at St. Conleth’s Park last week with Athy drinking in a first title in nine years. The restraint shown by Clogherinkoe fans after their first Intermediate title was laudable, fair play to them, but it is unnatural to expect communities not to come together in celebration at such times.

So, the GAA decision to suspend club games was inevitable, and it is hard to avoid the conclusion that completing the inter-county season will prove a Sisyphean task. Already, Fermanagh are being forced as of the time of writing to play a league game on the day a bunch of their players come out of isolation. In Ennis, where the hotel has cancelled their reservation.

Then you look at the shambles with the Republic of Ireland soccer squad over the weekend, the dangers of players traveling and lodging together self-evident. Realistically the GAA will not emerge unscathed and when it comes to the championship, it seems that any panels impacted up to the All-Ireland Semi Final stage will simply have to forfeit. Let’s see about that if a Dublin, Kerry, Kilkenny or Tipperary get hit with the virus during the provincial championships.

Whatever about the championship, I would argue the leagues are the more important competition for at least half of the counties, possible three quarters of them if Táilteann Cup status is to be dependent on finishing positions. Kildare of course are one of the teams in grave danger of dropping down to Division Three/Tier 2 so it would be in our interest to have relegation and promotion removed from the equation. At least, one assumes, the 2021 leagues will offer any team relegated an opportunity to regain their Division Two/Tier 1 status before the championship.

The sure-fire way of staying in Tier 1 is by winning our next two games however, and Jack O’Connor no doubt had both eyes on that when selecting a 31-man panel for the remainder of the season.

This was a panel selected on experience and less on club form. Of the five players newly called up only Jack’s son Éanna can be regarded as coming in on the back of an outstanding club campaign. Luke Flynn, Mark Dempsey, Ben McCormack and Matty Byrne were all absent in the spring for their own reasons but were on Jack’s radar back then.

The likes of Sam Doran and Paschal Connell might feel disappointed to have been left out this time. Connell was included in spring and has just completed one of his best club campaigns for Athy. He and Kevin Feely dominated against Moorefield in the county final. Doran meanwhile was second in the top scorer list from play behind only Niall Kelly.

The latter joins Chris Byrne from Clane as injury absentees but there must be doubts about Jack Robinson in particular as well as Neil Flynn and Daniel Flynn, both of whom had hamstrung campaigns.

The lack of impact of the All Ireland Under 20 winning side is becoming a big talking point and brings the discussion back to the appointment of O’Connor ahead of Davy Burke. The feeling is the latter would have nurtured that panel through to a greater extent and perhaps had a longer-term eye on the development of Kildare football.

Jack will have a more narrow, short-term focus and that seems evident in a panel containing only four of that team, although Robinson is from the same age group. Aaron O’Neill’s absence raised a few eyebrows and one wonders whether Carbury have done him a disservice playing him midfield these last two years. Mark Donnellan is still picked in similar circumstances but he has plenty in the bank in terms of inter-county goalkeeping experience.

For me, the bigger disappointment is Tony Archbold’s absence. I thought he was maturing nicely with Celbridge and his pacey attacks from wing back were a standout feature of their campaign. Shane O’Sullivan perhaps needs another year to mature but I’ve little doubt he will be back at some point.

Given the panel picked I do not expect any experimentation on Sunday. It will be the tried and trusted. The one exception might be Liam Power, who at least up to the quarter final stage was arguably the player of the club championships. A partnership of Power and Feely has potential and it will be interesting if O’Connor goes for that option. Tommy Moolick, Fergal Conway (who was missing from the league action in spring) and David Hyland offer alternatives as do Aaron Masterson, Matty Byrne and Luke Flynn.

Suddenly, midfield does not seem the problem area it was.

There is plenty of experience in defence but that has not always meant solidity as we know. Hopefully, there has been some work done on structure (and tackling) in the limited time available. Mick O’Grady, Eoin Doyle, Johnny Byrne, Kevin Flynn, Keith Cribbin and Hyland form an experienced core in front of Donnellan with Conor Hartley, Con Kavanagh, Shea Ryan and Dempsey all in contention, maybe Luke Flynn as well depending on what O’Connor sees as his best position.

The attacking options have narrowed with the absence of Kelly and Adam Tyrrell, offset somewhat by O’Connor’s call-up. I expect him to start on Sunday, possibly alongside Daniel and Neil Flynn on the inside line with Paul Cribbin, Conway, and Paddy Brophy at half-forward.

I feel a little sorry for Jack. Circumstances have not been on his side and no one would envy him going into these games with little time to prepare and no room for slip-ups. That said we should be capable of beating Cavan and Westmeath on home soil, even without the backing of a crowd. Shouldn’t we?

The Supporter appears in the Kildare Nationalist each Tuesday