HER’S is the voice you hear on that crackling tannoy they call the PA system in St Conleth’s Park with team announcements, substitutions and injury time announcements. 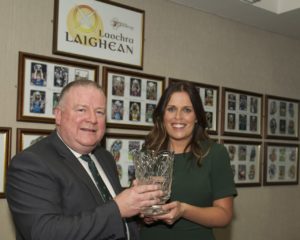 Her’s are the multitude of emails you receive with Fixture Lists, Fixture Updates, Changes, Cancellations or Postponements. Her’s are the texts and tweets you receive hundreds of times during the week, and particularly at weekends, with score updates and match results and other information.

Club and county PRO’s are often the forgotten people in the GAA but most of the time they are the friendly face, in good times and in bad.

Christine Murray is about to complete her fifth and final year, in accordance with GAA policy, as Co Kildare PRO after having served as PRO for Moorfield GAA for the previous 10 years. She became involved with Moorefield initially as Assistant PRO to Paul Aspell, through the encouragement grandfather Lauri Murray and Tom McDonald, who was Moorefield Chairman at the time.

“Tom told me he didn’t want me to be just someone who sits on a committee. He wanted me to be more involved so when Paul had to step away, I took on the role of Club PRO. It was a completely different role at that time, there was no social media, no websites as such. It was more a case of doing match reports for the local media, which I enjoyed.  Any innovations introduced, such as social media, were done as a club unit rather than by any individual because that’s the way we do things in Moorefield.”

“Social media has made the job of PRO much easier but a lot busier,” she added.

The role of County PRO wasn’t part of Murray’s immediate plan for 2016 but when Henry Barrett had to step away from the role she was sounded out for the position and was ratified at the April Co Board meeting and the rest as they say is history.

“I think if the role hadn’t come up the way it did, I’m not sure I would ever have had the courage to go for it but the way it happened I didn’t have the time to think about it but it’s been quite an experience and an interesting journey.

The Moorefield clubperson says she is now a completely a different person compared to that which took over the role five years ago. “In the first few years I might have played it a bit safe and I don’t think I was brave enough in the role. Initially I tried to do everything myself but now I’m not afraid to ask for help.”

In her second year as Kildare PRO Murray was selected as Leinster PRO of the Year, some achievement for someone so new to the role and despite her own misgivings of “not being brave enough” in that role. She saw that as a great honour to work for and to represent the county.

“During the past five years I have learned a lot about myself and have learned many new skills and working with different county managers in hurling and football has also been a great experience. They were all great people to work with.

It was great to start with Cian O’Neill as I knew him so well and although I would have been quite shy, he made me very comfortable in the role and he was so supportive to me. He was like a rock to me; he’s a great Kildare man.

Like many other club and county PRO’s 2020 has been a challenging one for Christine Murray with the task of keeping things “active and fresh” when there was actually nothing happening. “Reliving past years only kept people interested for a while. The involvement of the Kildare hurlers in the Roar for Rory helped us a lot then.”

When play resumed it all became manic for the PRO and her colleagues on the Co Board with matches at all levels and all grades happening seven days and nights of the week. Murray pays credit to the club PRO’s and Brendan Wolfe, Secretary to the Kildare CCC, for her ability to produce Team Sheets and mini-online Match Programmes for each of the Championship matches.

“I think sometimes the club people are forgotten about in the GAA but I certainly couldn’t do my job without the help and support of these people. We are very lucky in Kildare to have such good volunteers because that’s what we all are. People sometimes forget we have full time jobs outside of our GAA roles. It has also been great working with the county players, they are such hardworking people even if they don’t get the results they want or deserve sometimes.

Murray also praises the local media and says she enjoyed a great working relationship with them which she says was vital to her role as PRO. Highlights, among many, during her five year term she says would have been the League victory over Clare in 2018 to secure Division 1 status, the now famous “Newbridge or Nowhere” week and of course the All Ireland victory for the Kildare U20 team captained by Moorefield man, Aaron Masterson.

Murray would have been involved in many county finals, both in her role as club and county PRO but she says the 2020 County Final week was a very different experience.

“It was great to get to the Co Final and stage but it wasn’t possible to do a proper build up; there was a different feeling around on the day. You would miss the crowd, the atmosphere, the half time matches with the kids. I think even players felt the same. I know it was all for health and safety reasons but last Saturday just didn’t feel like Co Final Day for me.”

Now that her five-year term is up Christine Murray, who has recently begun a three-year stint on the Leinster GAA Communication Committee, says she hasn’t given much thought as to the future and to further involvement with Kildare GAA at county level.

“There is part of me that is ready to finish but there is another part that would like to stay on. I do believe I have improved things in Kildare GAA but I still think there is a lot of work still to be done from a PR point of view. While definitely ruling out seeking the position of Chair of the Co Board in the future, Murray says she is open to exploring other options for officer roles with the county.

“I have to see how any role would fit in with my life though. I do work fulltime and life can easily pass you by so looking at life balance would be a priority. If there is no other role for me in Kildare then I’d be quite happy to go back and focus on Moorefield,” she says.

From a purely selfish point of view, and I’m sure I speak for all local and national media who have worked with Christine Murray for the past five years, one would hope that there could still be a role for her at county level. She kept the media, the clubs, and the supporters fully informed despite I’m sure at times, when others might have preferred to say nothing.