Saluting the heroes past and present of Athy GFC 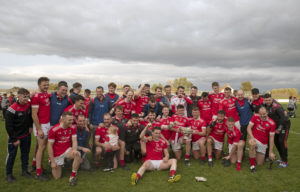 IN years to come it may be described as the Covid 19 Final, in much the same way as the weather disrupted All Ireland Hurling Final of 1939 is known as the ‘thunder and lightning final’. Last week’s Senior Football Championship Final between Moorefield and Athy was played while the country was reeling from the greatest pandemic to have hit the world since the 1918 Spanish Flu. Normal social interaction is limited. Our working lives are disrupted and against that background, a team from Athy created another memorable page to add to the history of Athy Gaelic Football Club.

A club’s history is measured in terms of success on the field of play and it is success on the big occasions that are remembered. When we look back on the club’s past, it’s a past featuring County Senior Finals won, not those lost. Those victories provided the identifiable yardstick by which the players of the past are remembered. The conquering footballing heroes of the 1930s, a decade in which Athy won the Senior County Championship three times are recalled by a generation who never knew or saw the players involved. They are the heroes of the club’s past glories whose names have come down to us as proud wearers of the town’s jersey. County players like Paul Matthews, ‘Cuddy’ Chanders and Barney Dunne who togged out with the legendary George Comerford whom the sportswriter, P.D. Mehigan, described in 1941 as ‘one of the best all-round footballers in Ireland’. George was from Clare and he played for his native county, for Munster and for Athy while stationed in town as a Garda.

The victories of 1933-1934-1937 brought other names to the forefront. Names of players who are recalled but whom we never had the privilege of supporting on the field of play. They are remembered because they were winners, men like Tommy Mulhall who played for club, county and province and whose footballing prowess is recorded in the annals of Gaelic football.

Nearer to our time are the winning teams of 1987 and 2011. Teams which provided the club with long-overdue success. The 1987 victory was the first time in forty-five years that Athy Gaelic Football Club won the Senior Championship. That win and the club’s success 14 years later helped preserve for future generations the names of the players involved. Gaelic Football is a team sport – 15 players with back up subs and nowadays a player pool too big to include on a match programme. It throws up the heroes of the hour. Some players may be consistently guiding the team’s fortunes throughout the championship but there will be players who on a specific day blossom to give performances undreamed of before. That is the beauty of Gaelic football. The coming together of the great players, the county team players with the club players to form a unified well-prepared team ready and able to take on the best.

This year’s team, captained by David Hyland, has created history and an identifiable niche in the club’s historical chronology which will always be recalled as the 2020 County Final. The team names will be recorded but with the passing of time references to the 2020 final success will be reduced to the players who like their predecessors of 90 years ago were regarded as the stars of the team. This year’s final was undoubtedly one of Mick Foley’s greatest hours. A former county player and the only Athy club player to win a footballing All Star, he joins the pantheon of local footballing greats of the past. He will always be remembered, as will the county players Kevin Feeley, David Hyland, Niall Kelly, Mark Hyland and Pascal Connell. That is the nature of memory which initially recalls all the relevant elements of a story but as time marches on, more and more of the detail vanishes. Hence the importance of recording and acknowledging all those who played in the county final and by doing so pay tribute to the footballing heroes of 2020.

The people of Athy, whether living at home in their native town, country or abroad are proud to salute the Kildare County Champions of 2020.

Many other footballers on the team panel contributed to the lub’s success, as did the team manager Vinny Walsh, fitness coach John Doran and team selectors Sean McGovern, Barry Dunne, Jimmy Robinson and Stephen Doyle.