IT’S just over a week since the county football finals but the Kildare Nationalist Sports team, led by Richard Commins, has been busy selecting the Championship Teams of the Year.

Here’s the Senior Team. What are your thoughts?

It’s a thankless task but someone had to do it, and while the rest of the team at Kildare Nationalist Sport were very happy to contribute their opinions, the buck stopped with me it seems when it came to the tough calls. In a sign of the changing fortunes in club football only four of last year’s selection have made it into the XV this year. 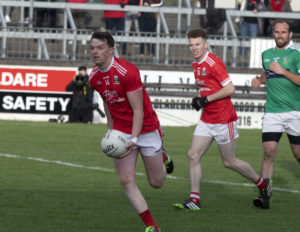 James Eaton (Athy) on the Championship

Naturally Athy dominate but six clubs are represented compared to three last year, which is a sign I believe of a better overall championship.

Always one of the most reliable shot-stoppers in the county, the former Kildare panellist was in top form throughout Celbridge’s run to the semi-final. While the likes of James Roycroft (Athy) and James Robinson (Round Towers) came into the reckoning, McNamara’s accurate long-range place-kicking set him apart. He scored 0-7 in all in the championship and his five points, all from distances in and around the 45-metre line, against Towers must have created a new record for a ‘keeper in the championship.

While his brother Mark has had more of the accolades in recent years, and another clubmate, the ageless Liam Callaghan was a strong contender, Sean has been steadily cementing his place in the Moorefield backline. He matured considerably this year and in the absence of Sean Healy and James Murray became more influential out the field as the campaign went on, as well. After a frustrating opening quarter of the final it was Dempsey who strode forward to get Moorefield on the scoreboard.

A difficult call here. County full-back Mick O’Grady spent the campaign in midfield and was outstanding there. Moorefield’s Liam Healy was a contender, but we have plumped for the 26-year-old Athy man, who was solid as a rock throughout their campaign and particularly influential in the final. Athy only conceded two goals in the championship and Ronan was a key component in that defensive solidity.

When Vinnie Walsh referred to the form of two or three younger players who had been developing into quality first teamers over the last year, Lawler is certainly one of the ones he was referring to. At just 23 years of age, the sales representative with Tegral has made the transition from junior football with Rheban to senior with Athy with aplomb and his tight marking and driving forward runs were a key feature in his side’s first title in nine years. Has a big career ahead and may come into the reckoning for Kildare in the coming year.

Very much in the same category as his clubmate Lawler, the 22-year-old Maher was a breath of fresh air and added pace and energy to the Athy half-back line as well as weighing in with four points, two in an impressive performance against Clane in their thrilling second game. Quieter in the final than heretofore but deserves his place based on the full campaign.

If Carlsberg did county finals. What a way to bring down the curtain on a stellar career if he is true to his announcement after last week’s final. Along with a number of Athy’s elder statesmen the 36-year-old former All Star looked fitter than the last year or two and his calm assuredness over the course of their six matches must have been a huge help to the younger players around him in defence. And then there was that catch!

There could be some debates as to which shirt he should fill but few would leave him out of their XV surely? If there is a more consistent performer in Kildare, I have not seen him, and he has had his just reward with the captaincy of club and county. Chipped in with four points but it was his aggression and leadership around the middle third that continued to mark him out and you really would wonder why he spent so long corralled into a corner or full-back position with the county. Occupies the same jersey as in last year’s selection.

There were several midfield performers who might have come into the reckoning this year but our final two almost picked themselves in the end. From Feely’s own club Paschal Connell had a fine year, justifying his call up to Jack O’Connor’s panel, while Kevin Murnaghan of Moorefield continued to defy time and Mick O’Grady re-invented himself as a goalscoring midfield marauder. Jamie Flynn of Towers deserves a mention too. Feely, though, looked fitter when the local lockdown ended than he has for a year or two and he was almost demonic winning possession around the field in Athy’s crunch games. Ran Foley close for man-of-the-match in the final and must have taken the most marks in the championship. A great boost for O’Connor to have Feely in this form.

Raheens were the surprise packet of the championship, their wins over Maynooth and Moorefield ending a long barren spell without a senior championship victory and put up a brave fight against Sarsfields. The aptly named Power was a force of nature in their midfield and showed the benefits of a winter’s inter-county training. He weighed in with 3-4 from play in just four games and his major against Sarsfields in the quarter final epitomised his desire as he shrugged off three Sash defenders to bundle the ball home. Will we see him strike up a partnership with Feely for Kildare in the coming weeks, perhaps?

Honestly, we could have picked Hartley in a number of positions and if it appears to be shoe-horning to put him at wing forward, I’d counter with the fact that his was very much a roving role and he weighed in with a remarkable 2-7 from play in Sarsfields’ five games. I suspect Jack O’Connor will find a spot for him on his starting XV as well. Apart from his ability to take a score the Sash man’s work-rate and appetite to snaffle loose ball is up there with the best in the county. Hartley is the second player on our team to be selected two years running, testament to his consistency.

While he wore a corner forward’s jersey, former underage star Doran tends to drift out beyond the ‘D’ and prompts a lot of his team’s attacks from there. In a year when competition for the inside line was probably hotter than at half-forward, we make no excuses for picking him here. Until overhauled by Niall Kelly after Johnstownbridge went out in the quarter finals, Doran was the leading scorer from play with 17 points in just four games. Jack might have another look at him having released him after the O’Byrne Cup.

He may not be as well known nationally as his older brother Niall but the workaholic Barry has been in and around the Athy team for the last five years. Never with the same impact as this year, however. Kelly has added the crucial ingredient of consistency to his game. He probably has to work harder than his brother to influence proceedings but it is that very quality which makes him invaluable for Athy, whether back in defence winning ‘dirty’ ball or creating attacks up front. His display in the final was another tour-de-force in a season of them.

The third man who is picked two years in a row. O’Connor’s place-kicking was as sweet and true as ever and more than ever he became Moorefield’s go-to man with the rest of the forward line inconsistent and struggling for scores. No such problem for the Kerryman who was top scorer in the Championship with 0-41 and joint fourth from play with 0-13. His three second-half points from play almost got Moorefield over the line in the final and his flick for Callaghan’s chance was a thing of beauty.

A masterful display in the final cemented a place in the team for one of the county’s most talented club players over the last 13 years. The 30-year old builder made his debut way back in 2007 but he has rarely looked sprightlier and his ability to win ball in front of his marker was a key factor for the champions. His deft touch put Danny O’Keeffe in for the winning goal in the final and his place- kicking put him into the top dozen scorers in the competition.

Top scorer from play in the championship with 1-16 and second overall with 1-26, Kelly is the fourth player from the 2019 team to make it on again this year. He scored in every game. Indeed, his tally in the final of 0-3 was his lowest return in six games, but of course he only played 40 minutes due to injury. You felt he had shrugged off his first-half wides at that stage, too. Will be remembered forever in Athy for the drilled finish to the net that proved the difference against Sarsfields in the semi-final.