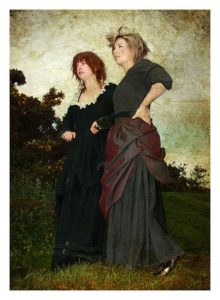 A one hour radio documentary on The Curragh Wrens will be aired on KFM this evening Thursday 15 October at 7pm and again on Saturday 17 October at 11am.

The documentary which was funded by the  Broadcastig Authority of Ireland with the TV licence fee,  offers a posthumous voice to a group of women who lived as outcasts in 19th century Ireland – the wrens.

The documentary explores how these women came to live on the margins of society as a phenomenon emanating from the Great Hunger.  Destitute, starving and considered the lowest of the low, they were shunned by society, the workhouse and the church.  Over 150 years on, ‘The Curragh Wrens’ revisits the story of a group of women who until now, were destined to be forgotten.

In 1867, an English reporter named James Greenwood was travelling by train from Dublin to Kildare, having been dispatched from the Pall Mall Gazette based in London.  His reason for travelling to the Curragh was not, however, to report on the military training and activity in the area, but instead to investigate the rumours of the ‘Wren’ women, rumours that had travelled as far as the corridors of power in the city.

His 3-part series of writings in the Pall Mall Gazette later that year in 1867 entitled ‘The Wrens of the Curragh’, has formed the basis of what history has recorded about these women who lived on the edges of society.  ‘The Curragh Wrens’ radio documentary seeks to retell these stories, situating them in a social, political and economic context in order to try to explain the lack of choice that led a women at the time to become a ‘wren’, and the hardships that such a choice entailed for the remainder of her life.

The wrens of the Curragh were an outcast community of 19th-century Irish women who lived rough, brutally hard life on the plains of Kildare. The name ‘wren’ comes from the shelters they lived in, which were hollowed out ‘nests’ in the ground, covered with layers of furze for shelter and warmth.  Their nests were numbered, grouped into villages and so low “you crouched into them, as beasts crouch into cover” with “no standing upright until you crawl out again” (Pall Mall Gazette).

Though the living conditions of these women may have left a lot to be desired, it is obvious that the way in which they structured their community was quite unique, as the older wrens generally stayed at home to take care of the children and perform daily chores while the younger wrens went out to work.

Their treatment by the majority of locals, clergy and the paying clients themselves, the soldiers, was beyond harsh.  They were beaten, abused, scorned and ridiculed.  Many died in ditches from exposure and disease.

The Pall Mall article and the subsequent uproar in the halls of power led to an increase in formal institutional control over the wren’s lives – some consequences were positive and some not so.  One immediate consequence was the introduction of the Curragh of Kildare Act which enabled the army authorities to regulate more fully the access of women to the camp. The Curragh also came under the control of the Contagious Diseases Acts and a lock hospital, to treat the women, was established in the camp in 1868.

In 1873, a concerted effort was made to finally rid the vicinity of the camp of the wrens, but it succeeded only in driving them onto the roads and into the neighbouring towns and villages, much to the consternation of the local inhabitants.  Over the next two decades however, their numbers continued to reduce until the point where the wrens of the Curragh were reduced solely to the memories left behind in the pages of the Pall Mall Gazette of 1867.

Over the last decade however, they have slowly begun to re-emerge from these pages to be represented in various forms in both the local and national arts communities, including in short stories, novels and a theatre play, all trying to tell the forgotten story of The Curragh Wrens.

Featured in the documentary are Orla McAlinden, Author of ‘The Flight of the Wren’, Reggie Darling, Curragh Local History Group and Catherine Fleming,  Author of The Transportation of Women from Kildare to Van Diemen’s Land in 1849.

The documentary was funded by the Broadcasting Authority of Ireland with the Television Licence Fee and produced by Little Road Productions Ltd, based in Co. Louth for KFM Radio.

The death has been announced of Mary McCormack (née Mooney), Newbridge