The weigh-in and medicals have been completed in the Bavarian town of Donauwoerth in Germany and it’s all systems go for Kildare’s Katelynn Phelan to take on local, Jessica Schadko, the undefeated German champion, there on Saturday night with belts at WBC Youth’s, WBF and WIBA levels all at stake over eight, two-minute rounds. 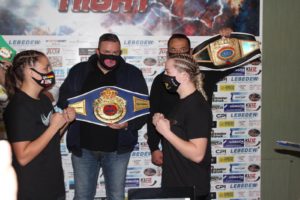 Kildare boxer, Katelynn Phelan, and her German opponent, Jessica Schadko, at the weigh-in on Friday afternoon

St Brigid’s Boxing Club welterweight, Phelan,  weighed in at 66.1kg while her opponent, Schadko, smaller in stature than Phelan’s handlers expected, tipped the scales at 66.2kg, wearing a tracksuit bottoms and t-shirt.

Phelan, Ireland’s youngest professional boxer, had the last of her three successful fights on 1 February when she defeated Bulgarian, Borislava Goranova in Belfast. Schadko had similar success when she took on the Bulgarian two weeks later in the Bavarian capital.

The fight was due to take place last month but was postponed because of illness to the German.

This will be a big step up for the young Kildare boxer, a former World Youth and Junior medallist, as she has never boxed beyond four rounds while German-Ukrainian, Schadko, a crowd favourite in her hometown, has fought up to 10 rounds in the past.

Speaking to Kildare Nationalist Sport from Germany this evening, Niall Barrett, who is in Katelynn’s corner along with her father, Paddy, said that she is feeling relaxed and confident and that everything was going perfectly for the fight.

Phelan’s fight this Saturday night will be streamed live at http://live.bgb-movie.de/

With great performances in the ring on the international stage from Kildare’s Eric Donovan and Gary Cully in recent weeks there are high hopes that St Brigid’s starlet, Katelynn Phelan, can make it another good night for Lilywhite boxing on Saturday night.

We wish her well.