KILDARE minor hurlers take on Antrim in Abbotstown on Saturday (Throw-in 2pm) in the Leinster Championship.

New Manager, Naas clubman, Eoin Stapleton, and his Management Team of Liam Dolan, Mairtin Boran, Mark Moloney, Noel Ryan and Pat O’Meara have named a very strong team although injury doubts rule out captain, Cian O’Neill, as well as Alan Tobin and Harry Younge. The squad of 32 includes players from eight different clubs while the starting 15 for Saturday has a spread of six clubs. 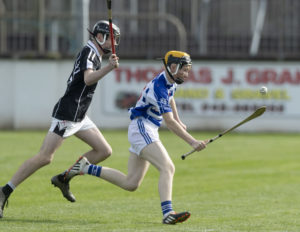 Kildare minors beat Antrim 2-19 to 0-7 in the corresponding game last year and although they lost to Laois by a point they went on to beat Westmeath, Down, Meath and Offaly (AET) before losing out to Kilkenny in the semi-final.

Stapleton, who won an U21 All Ireland with Limerick in 1987, was involved with the Kildare minors in 2018 and 2019 before taking the reins last November. He told the Kildare Nationalist that, non unexpectedly, preparations were going well until the various lockdowns and plans for challenge matches against the likes of Waterford, Carlow and Offaly had to be curtailed with only the Offaly match surviving.

“The young guys have done very well in challenge matches, the Stapleton explains. “In the panel this year we have a number of players to the year and a number of players a year below. The team that played last year, when we got to a semi-final, had been more or less with us for two years so that benefitted the players enormously. They had played all the challenge matches, played all the big teams  consistently and we had taken our beatings when we got them but we tried to learn every time.”

The nature of the cycle is that the 2020 panel has nobody from last year. “Kilkenny, who beat us in the semi-final in St Conleth’s, have four of the team from last year, Offaly have five,2 the manager explains. “But you can see it in the Development Squads which years have good a good crop and which don’t.There’s great work going on at county level and with the clubs; it’s just how you nurture the players. We try and run it as if the players are on the Limerick or the Clare panels.”

Of the 32 players ten are U16 and although they got a Celtic Challenge Final last year they lost out. Garryspillane native, Stapleton is upbeat about the prospects for 2020 though. “That sets us up nicely for this year; it gives us a target to aim for. The standard in Kildare has been improving over the last number of years. We see it in the Development Squads and when the players go back to their clubs. It’s great to see a lot of players from the last two years filtering through to the senior teams with their clubs and there’s also six or seven in with David Herity and the Kildare senior team. We are using that to talk to the players, telling them what their targets are: go back to your clubs, get on to your senior team and then on to the county panel.”

“Stapleton added, however, “For Kildare hurling the gap is at U20 level and that is being worked on for next year. We’ll have a strong Management Team in there, have a “professional” show and that will close the gap between the senior hurling panel and the minor hurling panel. The pathway will be there for kids then and the clubs will benefit from that.”

Stapleton is fulsome in his praise for the Kildare Co Board and the Development Officers. “We are very well looked after by the Co Board and we get fantastic support from them. I have John Doran and Paul Divilly minding me the whole time. They are now trying to get more coaches in to improve the U14 and U15. The Co Chairman rings me, the Co Secretary rings me, the Co Treasurer rings me, the Operations Manage rings me, fantastic support. They are serious about it and they see that we are serious about it. Our job is to send the players back to the clubs as better persons and better players.”

Looking forward to Saturday’s game Stapleton says that although he is not fit t0 play dual player, Cian O’Neill has done a “tremendous job” as captain. “The important thing is that we get to throw-in time and that the throw-in happens. Next, we need to play to our ability. We can’t afford to get star struck just because it’s a championship match. We have to play to our ability and the players enjoy it then we are good enough to win.

Because of the structure of the Championship there is no back door in 2020 but if the infectious enthusiasm of the manager permeates to the players then the Kildare minor hurlers could do very well indeed.

Important League win for Kildare as Hyland and Kirwan star