HAYLEY Nolan from Kill in Co Kildare has been included in the Republic of Ireland’s final squad fo rnext Friday’s crucial UEFA Women’s European Championship qualifier away to Ukraine. 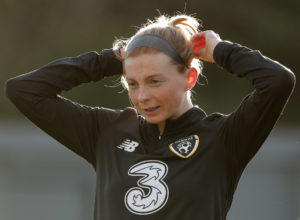 The 23 year old, who recently signed for London City Lionesses, a side managed by Dubliner Lisa Fallon until last week, is part of a 24 strong final panel selected by Manager, Vera Pauw, for the game. Former Peamount United player, Nolan, who spent a time at Hartford University in the US, has represented the Republic of Ireland at U-15, U-16, U-17, U-19. Nolan was also a member of the Republic of Ireland team that won their group at the 2014 UEFA Women’s Under-19 Championship and qualified for the semi-final.

The Kill woman has also played gaelic football with her native club and represented Kildare at underage level.

Victory for Irish team on Friday next would secure a Play-Off spot with one game still to go – at home to Germany on 1 December. A best runners-up spot, that guarantees automatic qualification, is also in contention.

As per UEFA rules, the nine group winners and the three best runners-up (not counting results against the sixth-placed team) qualify directly for the final tournament, while the remaining six runners-up advance to the two-legged Play-Offs that will be played in April 2021.

Ireland overcame Ukraine 3-2 in Tallaght Stadium on October 8th, 2019 (which was Pauw’s first game in charge) and will be hoping to complete the double over the team who currently trail them by seven points.

In squad news, goalkeeper Marie Hourihan misses out due to a dislocated finger, while a number of other players are standby ahead of the squad meeting up in Duisburg, Germany for a training camp ahead of the game.

The game will be broadcast live on RTE2.