Kildare’s recently retired legendary trainer, John Oxx, from Currybeg on the edge of the Curragh, has been speaking on Paddy Power Media’s new podcast, From The Horse’s Mouth about retirement, his plans for the future and some of the great horses he has trained like Sea of the Stars. 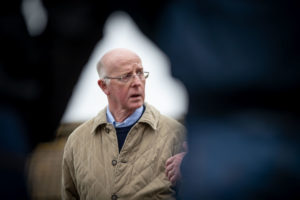 Oxx is very comfortable about his decision to retire at this time. “Oh sure I’m feeling fine about it – it was an easy enough decision to make and we’re very happy about it, my wife and myself, so I suppose you don’t want to think too deeply about it, but look it’s nice to wind it up and nice to look back. You’d hope you’d sort of be able to retire quietly and not have anybody talking to you and all that, but sure I’ve learnt a long time ago, you just can’t avoid certain things so we’ve had lots of interviews, but it’s been very nice I must say to think and when people ask you questions, it makes you think back on things that you’d forgotten about or that you maybe weren’t putting enough importance on and all that so it’s a time of reflection, but no I’m feeling fine. I’m looking forward to it”

The renowned trainer didn’t see an unusual 2020 as having any part in his decision to retire. “No not really no. I think when racing was locked, you could more or less carry on. People could carry on their businesses reasonably well – I’m sure some people were affected by it more than others, like everything else, but no in my case that had no bearing on it at all. We’ve been thinking about it for a few years and now is the time, Covid or no Covid. We were going to do this I think.”

Oxx was very excited about the famous Sea of the Stars from the start. “Well he was a beautiful horse and of course he had this terrific pedigree – a half-brother to Galileo so obviously your hopes are always high when they have a pedigree like that and his great conformation, a beautiful well-grown horse, beautiful mover, smashing temperament, he was a kid’s ride as a yearling, did everything right, learned quickly, big smart knew everything straightaway, easiest horse to break so obviously we had hopes for him. The sort of horse you’d put Mick Kinane on the first chance you get. He was impressed right from the beginning so our hopes were high, but we’ve all seen that before – the early signs are good, pedigree is good, the horse is nice and they work well and sometimes they go on and they win the first race. So many of them then just crack when the big day comes – the more pressure, more racing it sorts them out. But with him he never cracked, he was never in danger of cracking either. We knew he had the constitution mentally and physically to go right through the three-year-old year and win all those races. Once he’d won the Guineas and the Derby, we knew what he had then and we just had to keep him right and go through the rest of them and hope for the best.”

The Currybeg trainer reminisced  about about his emotional interview with the BBC after Sea The Stars won the Arc. “Well I’m not sure I can remember the interview, but well look with a horse like that would make you emotional. I still get a bit emotional actually talking about him. But that was such an important thing. Well of course such a great thing to have a horse like that – it was a real miracle, no trainer could expect ever to train a horse like Sea The Stars – it’s just they’re so rare and for one to land in your stable couldn’t be planned and you’re just so grateful to have them. But it was such a relief that day to see him win the last, get over that last hurdle, because he had to win all those races to be one of the greats. You don’t get that little tag by having one great performance – you’ll see some horses and they’ll have one fantastic performance, but they can never repeat or never done before or they’ll have two big runs, but he had all that series of them each month for six months. But he had to do that and he couldn’t be beaten in the Arc – it was one time I was pretty anxious. We knew he was in great shape and in fact Mick said he was better than ever, he was improving all the time. But the Arc you can lose, things can go wrong and so to get him over the line was just an incredible, incredible thing now so if I was emotional, I can understand why.”

Breeders Cup winner, Ridgewood Pearl was another of Oxx’s famous winners, and he say her as a great filly. “Oh she was – yes she was a great filly. A big, strong masculine filly – very dependable. Her work at home was always very consistent – she was the same every day, she had great temperament. She was just a racing machine – a big, strong filly, you could see it the day she came in to the yard. I always like those big, strong fillies and she always looked really good. I’ll never forget the day Christy Roche rode her first time out at The Curragh in a Listed race. I ran her first time out in a Listed race – I think she was favourite, I wasn’t there, I had a runner in France on the day, but he got beaten a head and a neck, just didn’t touch her with the whip, gave her a nice introduction. He came in and he told my assistant Jimmy that that’s the best filly I ever rode so I though gosh, we thought she was good all right, but that was a fair statement from Christy, of course, who was a man with great instinct and he actually won the 1,000 Guineas on her then the next year. But she was a great filly and the Breeders’ Cup was a big event all right, of course, at that time it was just one day, but six races I think was all they had. Nowadays it has extended to two days and there are more races so they were difficult to win for sure and it was a great occasion, particularly because of who owned her too. She was owned by a local man in Kildare, Sean Coughlan and his wife Anne. Sean had grown up and he wasn’t exactly born with a silver spoon in his mouth and he went to London, made a few bob and came back and had a horse and it was a great thing for him to have a champion filly trained on The Curragh beside where he was born and it was very exciting for him and they got tremendous, tremendous fun from it. [Was the Breeders’ Cup in Santa Anita?] No that was in Belmont that year – no we had a wet day – it rained all night and all morning, but suddenly just stopped raining before our race so that was good!

John Oxx had a tremendous association with the Aga Khan and of one of his horses he thought Sinndar’s three year old campaign as phenomenal. “Yeah it was – I think he was the only horse to have won the Epsom Derby, Irish Derby, and the Arc. He was a great horse – he was undemonstrative at home. He was a lovely looking horse, beautiful horse, a beautiful mover, anybody who’d come to the stable here and come out with me looking at the horses, they’d pick him out and say ‘God, what’s that?’ and a lovely looking, medium-sized horse. But he didn’t show a lot at home – I thought he could be a horse who would run well in a Derby without winning it, but it soon became apparent as a three-year-old that he was going to do much more than that and he always just pulled out enough and he was a horse that improved every time he went to the races. He was 5-7lb better than the previous time – he just went up and up and up and there was no end to what he could pull out of the bag. He was a great horse – very solid, same every day, same every day, just got a bit more aggressive as the year went on. You could see him changing and improving into the autumn and as soon as he won the prep race for the Arc, the Prix Niel, we knew he’d be very hard to beat in the Arc. So anyway it all worked out well and he didn’t do too badly at stud actually, but he didn’t have a super pedigree. There were little things in his pedigree which maybe stopped him from doing a bit better at stud, but we have fond memories of him for sure.”

The now retired trainer reflected on what had changed most about training. “Yeah well that’s an interesting question. Well I think it’s harder and harder for trainers to run their business and it’s more expensive to keep going. Trainers are up against it a bit more – there’s a lot of competition I suppose too. Some trainers have an awful lot of horses, bigger trainers sweeping up a lot of the horses, but that’s something, that’s the way it is, that’s life and that’s the same in every business. So I think just there are more trainers struggling than ever before because of the difficulties of paying wages and doing everything right, having to comply with all the things we have to comply with and then the level of competition, it’s difficult for people to deal with. But that’s the main difference I think – life was a bit easier before for everybody.”

Although he has no definite plans for retirement Oxx sees himself keeping busy. “I haven’t got any plan in particular. I have a property here that I have to keep an eye on and we’ll hopefully have a tenant into it at some stage. No I’ll be keeping an eye on things, probably from a bit of a distance, and keeping in touch with everybody. I’m sure people won’t let me do nothing and I’m sure I’ll get little jobs to do probably from time to time for people and get out and about and hopefully have an excuse to go to the races and it’ll be nice to just keep in touch with all of the people I know. It wouldn’t be nice to live like a hermit – I like reading, but I don’t want to read a book every day all the time and never go outside the door. So I’ll enjoy going and meeting all my fellow trainers and jockeys and what have you over the years and keep in touch with them and see how they’re getting on. So I don’t know – I doubt if I’d want to be terribly busy, but I’m sure I won’t be idle.”

TURAS Is On The Right Road In Kildare

Moolick And Cribbin Bow Out After Great Service To The County