A Fan for All Seasons

AT a time when spectators have had limited or no access to attending GAA matches the opening chapter of a new book, The People’s Games: A GAA Compendium, by the renowned author perfectly captures what attending the club or county match means to GAA fans. 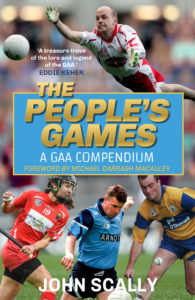 At a time too when the very GAA Championship of 2020 is under threat because of the continuing rise of the dreaded Covid-19 cases over the last few weeks the book is a telling reminder of what championship games are all about. It comes too at a time when GAA personnel at club and county level stood shoulder to shoulder, at a social distance, to provide support for the country and the communities it serves.

To quote author, Scally, “The GAA is part of all of our autobiographies. No organisation brings that sense of identity as the GAA. It is about how we feel about ourselves, individually and collectively. However, in a sense the GAA defies classification. It is more than a national movement. It is more than a sporting body. It is more than a cultural entity. It is all of these and more. Yet while the mystery of the GAA eludes easy analysis the one thing that can be said with certainty is that it has been and continues to be driven by remarkable people on and off the field”

In the book Roscommon native Scally pays homage to the GAA and its people. The book is a celebration of the magic of the GAA through the stories of some of the people who populate it.

The opening chapter is devoted to Kildare fan, the award-winning writer John MacKenna, who shares his love of the county team:

The memory is of my father coming in from the garden with a sally rod and my mother cutting a section off an old white sheet and then pinning the sheet to the sally stick with drawing pins to make a Kildare flag for me. The details are still as clear, sixty years later, as they were on that Sunday afternoon.

We must have been heading to a match in Athy or Portlaoise – the game is gone from my memory. But what remains is another Sunday, a bright sunny afternoon. I was ten or eleven and Kildare were playing in Athy. There were no fences or security gates back then, children sat on their fathers’ shoulders or squatted on the sideline, as close as could be to the action. And that’s where I found myself, cross-legged, close to the half-way line, my flag in my hand.

At that level, every kick was heard and every tackle was felt and every shoulder made the ground shudder. And, above all others, one player dominated the sky and the ground that afternoon; one man rose to field every high ball and to launch attack after attack from the half-back line. That man was Mick Carolan.

To me he was everything I wanted to be. Tall, handsome, athletic, fearless, talented. He was Kildare. When the heavy, laced football thudded out of play beside me and he came to take a sideline kick, I was as close to him as I’d ever been, so close that I must have been in his line of fire but, instead of asking me to move, he reached down and ruffled my hair before steadying himself and putting the ball over the bar.

Had the hand of God reached from the clouds and anointed me, I wouldn’t have felt any more deeply or wonderfully blessed. I had been anointed by the touch of greatness. Days like that, moments like that, were the ones that sowed the seed of passion in my younger self. There would be bad days to follow, many, many bad days but the fire of that memory has kept me warm for well over fifty years.

The darknesses, when they came – and they came regularly – were often in Newbridge, St Conleth’s Park, that drab, dull, decaying stadium that has something of the Soviet era about it. There were last minute goals that ended the dream; sodden league Sundays when nothing could go right; Glenn Ryan like a trojan horse trying to drag a team behind him.

There were bitter Sundays in Portlaoise and Navan. There was the day Kilkenny beat us in an O’Byrne Cup match but that, in its own dark way, became a blessing, a pit from which the only way was up.

And there were other dark days – travelling from Tullamore with my Carlow-born brother-in-law, Donal; his father and his two Carlow-born daughters after Carlow had beaten Kildare by seven points in 2018 was more a punishment than a pilgrimage.

Those are the days that test.

Throughout the late eighties and the nineties, my son Ewan and his friend Jeffrey were my constant companions at matches. My determination never to be late for a game became a running joke – the punch line coming when we arrived in Cavan for a league match only to find that not only were we early but the pitch gates hadn’t even been opened! It was one I was never allowed to forget.

On another Sunday, as the three of us made our way to Croke Park, a two-seater plane crash-landed through a ditch on the road in front of us. ‘Not a good omen,’ Jeffrey said, drily. He was right, Dublin beat us that day.

There is something in the game, in the passion, in the hope, in the loss but, most of all, in the commitment of players and supporters that keeps the spirits high and hopeful, even on the down days. And the thing is, despite the imbalances of money and facilities and population, I know there will come a day when, again, Kildare will beat Dublin and that thought keeps me travelling on. ‘Drive on’, we say. ‘Drive on, Kildare.

John Scally’s book The People’s Games: A GAA Compendium is available in all good bookshops now.