Big Night for Hayley Nolan and the Republic of Ireland Squad

JUST as last Saturday night was a big night on the international stage for Katelynn Phelan, so too is next Friday night, this time for Kill native, Hayley Nolan. The 23-year-old former Kildare LGFA minor player, is part of the Republic of Ireland squad which faces Ukraine in the Obolon Arena in Kiev in a crucial UEFA Women’s European Championship Group I Qualifier. (KO 5pm Irish time) 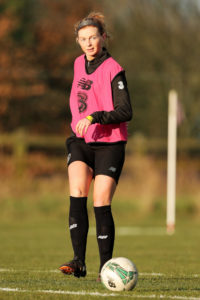 A draw or a win for Vera Pauw’s team would secure a Play-Off spot with one game still to go – at home to Germany on 1 December. While a best runners-up spot, that guarantees automatic qualification, is also a possibility.

Hayley Nolan spoke to the Kildare Nationalist from Manchester Airport just before she boarded a plane bound for Kiev after her afternoon match for her new club London City Lioness which they lost 1-0 to “an against the run of play penalty.”

Nolan left Kill and a fledging Kildare LGFA career as an 18-year-old to take up a soccer scholarship in Hartford College in Connecticut which was initially a tough time for her. She was playing for Peamount United and planning to go to UCD. “When some coaches from the US came to me and asked if I would like to play soccer over there, I just couldn’t turn it down. The facilities over there are amazing. It was a tough decision as I was playing for the Kildare minors and for the Irish underage teams and Peamount Utd, we were looking to get into the Champions League, but I think it was the right decision to make.”

Nolan’s parents stayed with her for a time in Hartford. “I am quite an independent person but it hit me when they were leaving as I realised I would be on my own and that I didn’t know anybody. It was tough for a while but the American’s were great, they have this whole team camaraderie and they look after you very well and I settled in easily then.”

The young Kill player qualified with an MBA in Finance and was considering staying on in the US but Covid-19 intervened and she returned home at the end of April of this year. Although it was difficult to arrange trials because of the pandemic eventually, she was snapped up by London City Lionesses, a team managed at the time by Dubliner, Lisa Fallon, who recently had to step away for family reasons.

“Lisa thought I had something and that I could bring something to the club. She knew me from the Irish set up so I am very grateful to her. She was doing a great job at the club for the short time she was there and she left it in a better condition than it was previously. For myself I am really happy here and I love the club.”

“We are bitterly disappointed with today’s result (1-0 defeat to Blackburn). We dominated for maybe 89 minutes but gave away a penalty against the run of play. It was just one of those days,” Nolan ruefully reflected.

Looking forward to Friday night’s game the Irish midfielder sees it as a massive game for the team. “We are in a great position. A win would give us automatic Play-Off spot which would be massive going into the final game against Germany. A victory would mean a lot not only to the panel and the coaching staff but also to the country particularly as the men’s team failed to qualify. We are very focussed now and we showed in the second half against Germany recently how well we can compete at this level. I think we have the most talented group of players that the country has ever seen.”

Looking forward to gaining her first cap soon Hayley has looked up to another Kildare player, Leixlip’s Emma Byrne whom she says was a trailblazer for women’s football in Ireland. “It’s because of Emma Byrne that we are now talking of equal pay for the men’s and women’s international teams. I think it’s inevitable, it’s needed and it’s happening in other countries.

“Emma may not have reaped the rewards in her playing time but she was vocal to benefit the players that came after her. We have to be thankful to her.”

Looking to the future Nolan is ambitious. “I am looking forward to getting into the international team and to cementing my place there. I think we can be a real force and to compete with the likes of Germany and I want to be a part of that and I want to be part of history for Irish football. My ambition is to play at the top level in club and international football.”

She may have ambitions for the international stage but the former Kill and Kildare GAA player still hasn’t forgotten her roots. “Oh, I certainly miss the GAA. If I was asked at 18, I think I would have preferred Gaelic football. I couldn’t get over how much I missed playing for Kill. If I could play both GAA and professional soccer I would but I don’t think they would allow me,” she laughs.

“I keep an eye out for the Kill and Kildare results and I still keep in touch with some of the players I played with.”

Hayley Nolan maybe an independent strong-willed athlete but she is still grounded in the community that is Kill, that is Kildare, that is the GAA. We wish her and her colleagues the very best for Friday’s match in Ukraine.