Barry Brophy was recently elected as President of Naas RFC and it’s 98 years since his Grand Uncle, Michael Conway, along with Bill Osborne and Laddy Mooney, re-formed Naas RFC in 1922. Brophy says it is an honour and sometimes a daunting challenge to follow in the footsteps of the club’s former 34 Presidents, and many Executive members. 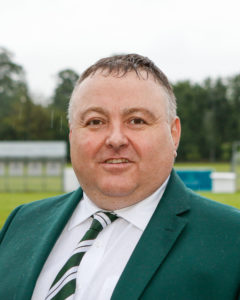 Naas have steadily grown over many years from being a one team, men’s club within Leinster Rugby, to today where they sit proudly offering Rugby to all in the community. Now Naas RFC play and have played in the All Ireland League (AIL) for the last 20 years, and are competing in Division 1B, having progressed through the divisions steadily over the years.

Brophy says, “We offer rugby to Minis, Youths, Girls, Ladies, Men’s and last year, the club proudly started Additional Needs Rugby. This has proved to be a resounding success and has grown significantly in just 12 months.”

Naas RFC have now in excess of 800 members, with the majority in the Mini / Youth sections, under the stewardship of appropriately trained professionals. “In a recent brainstorming session, the team managers and coaches of our Minis committed to paper the plan for the year, with our expectations along with our ethos, and without debate the safety of our minis was first on the list followed next by fun. In fact, you had to go to number 5 on the list to find rugby. Our measure of success is not what we win with our Minis, however instead how many of our Minis come back to play for Naas as the new season starts,” the President explained.

The Rugby season as we know it, has changed. The AIL is now postponed until January. Instead there is a replacement competition for Leinster only clubs, due to Covid – 19 and Naas are now competing at the top level of Senior Rugby in Leinster and have earned their place in the top 9 teams in Conference 1.

Barry says: “We are now playing within our well-earned position among the elite of Leinster Clubs like Clontarf, St Mary’s College, Lansdowne, Terenure College etc. In the last few weeks, and having won against Terenure in the opening game, Naas then narrowly lost against Dublin University and after that Clontarf where a new early season selection performed very well where, as we reported in the Kildare Nationalist, they leaked a few tries that did not reflect the final score.

“We are lucky in Naas that our Senior XV have a lot of competition for places from our J1’s, J2’s, J3’s and our very talented Under-20’s. Having one of the largest Mini / Youth sections in Ireland we now have constant churn of players, who leave us to play in Rugby schools at 12 years of age, and following school return to play in Naas, where they have learned, we hope, the basic skills and more importantly rugby ethics, respect and integrity. If Naas RFC players leave us with basic skills and a good understanding of the ethics and respect, then we have done our job well,” the President enthused.

Just like his fellow rugby clubs and clubs from other sports Barry expressed concern over the effects of Cover-19. “Our personal, business and recreational lives have been turned upside down. It seems the regulations change daily in some way, somewhere in Ireland”.

To prove the fact, during this interview Brophy receives a few calls and mails, informing him that the game which Naas were due to play against St. Mary’s College on Saturday last in Forenaughts, and all other Conference Elite games are now postponed until further IRFU guidance.

The Naas RFC Executive, are now focussing their efforts on member welfare. This is all members, young and old. The President explained, “During the first lockdown, we as an executive were very heartened by the approach made to us by our Senior Players, offering to assist our Senior members and supporters. The Executive Management team can assure all past Members, supporters and friends of Naas RFC, that if we can help you in any way that we would be more than delighted to assist during this difficult time. Stay home, stay safe, let us tackle the shops for you”.

How would the President sum up Naas as a club, and how do they plan to deal with the current Covid- 19 Pandemic The reply is not rugby focussed, as you might expect, but he says it is and must be, people focussed. “It is all about people members and friends of rugby now. We are in difficult times, and need to make sure all members and friends of Naas RFC are safe and well. While we all enjoy this game so much, I think this is a time the game must take a back seat. Let us focus on our friends from all clubs, and make sure they are all safe. This is a very difficult time, so all I can advise is let us all look after each other and remember your friends and club members are there for you, and this applies to all sporting clubs”.

Finally, what is the future for Naas RFC? Barry Brophy pauses before he answers. “We and all sporting clubs are going through a very difficult financial time. The Government must invest and support all Rugby and all other sporting clubs. The Government has a responsibility to promote, encourage and support people, when we eventually exit Covid. And what a better way to do this but through sport.”