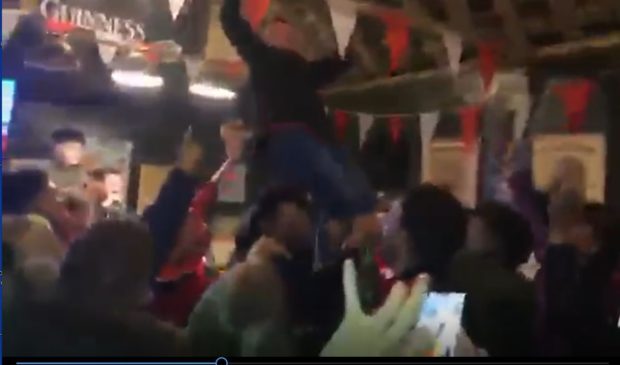 Athy GAA club has refused to be drawn on the content of a controversial video that has emerged over the weekend purporting to show supporters celebrating the club’s victory in the senior football championships three weeks ago.

“From the beginning, the priority of Athy GAA club, during this pandemic, was to protect the welfare of our members and the community.

“We have worked with frontline services doing our bit for our community, be it in the supermarket, pharmacies or whatever with our club sponsor Pettits.

“We have never compromised the safety of anybody through any activity, any games or any functions.

“On the night of the county final there was no parade and our clubhouse was closed. We organised a meal for our players after the county final, late that evening, and it ended. A lot of children and a lot of people lost out with no homecoming but it was the right thing for us to do,” he said

“Athy GAA club has no further comment to make,” he concluded.

The 49 second video clip, which was widely shared over the weekend, shows a large crowd celebrating with complete disregard for Covid 19 restrictions and absolutely no social distancing.

It has resulted in many comments of condemnation on social media platforms.

The video shows the crowd singing The Bog down in the Valley Oh, with one man doing pull ups and literally hanging from the rafters in the building.

It is believed the building where the celebrations took part is the alleged shebeen raided by gardaí as part of Operation Navigation Friday night last 23 October.