“From the horses mouth” with Mick Fitzgerald and Ruby Walsh 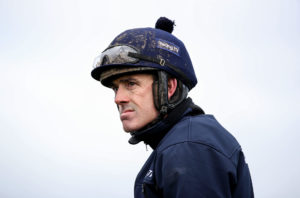 The Jumps legends talk about various horses that have already appeared at the beginning of the new season or horses that they are particularly looking forward to this term.

Ruby Walsh was asked if Captain Guinness was worth a second chance after pulling up at Tipperary on his chasing bow. “Yeah he pulled up at a – a heart fibrillation was the official report for his display – and look horses can overcome that absolutely no problem. But I was almost happy to see that there was an actual excuse for it and not some unexplained bad run.

So yeah look I think he’s a very good horse Captain Guinness. I thought he was very good in Punchestown last year against Andy Dufresne and I thought fences would bring out an improvement in him, but he has to come over that physical hiccup.”

What were the horses that took Mick Fitzgerald’s fancy? “I think the filly of Dan Skelton’s [Elle Est Belle] – I watched her win. The trouble is with that you don’t know how deep that race was and you can get very carried away, a lot of horses finished very tired at Aintree so I just in the back of my mind would treat that with a little bit of caution.

Look this is the time where everybody thinks they’ve got a superstar and there’s quite a lot of bubbles burst around this time of the year. But there’s quite a nice horse of Nicky Henderson’s called Pipesmoker who’s still a maiden, he ran in a few novice hurdles last year, finished second behind Sporting John which is quite good form.

He looks a lot stronger horse this year – I’d be just keeping an eye out for him. I saw him the other morning schooling and he very much caught my eye. But Shishkin who won that Supreme Novice’ Hurdle – I watched him schooling over fences the other morning and he has the wow factor. He had it beforehand over hurdles but watching him over fences, he looked the real deal.

Could Ruby give us a name or two? “I’m going to go for two horses in the novice chase department as well – I know people are saying oh give us something we haven’t heard of but unfortunately when COVID 19 kicked in in March, a lot of what would be this year’s bumper horses are maiden hurdlers went out to grass so you never really got to turn the screw on them and to see what could be the best ones for the upcoming season.

So we don’t know at Willie Mullins’s and it would have been much the same in Paul Nicholls’s, Nicky Henderson’s etc because March time would have been when you would have been finding out what you have for this year, but no-one got to do that so we don’t have dark ones for you, well I certainly don’t anyway.

But there was two novice hurdlers that ran in Cheltenham – neither of them won but I think both could have improved to take on the horses that beat them in Cheltenham last year this year. And that’s Elixir D’Ainay to go up against Shishkin and The Big Getaway who was third to Envoi Allen in the novice hurdle there. I think they’re two horses that were novice hurdling last year at Willie Mullins’s that will make really good novice chasers this year.

What are Ruby’s thoughts on Janidil, who is a 40-1 chance with Paddy for the RSA Chase and 50-1 for the Paddy Power Stayers Hurdle?

“Yeah he looks well, schooled over fences the other morning and he seems to be in great form. And the one you gave Friday to follow for the year, Carrigeen Lotus, I thought she won well in Gowran on Sunday. Battled well to beat one of Paul Nolan’s and I think Carrigeen Lotus is a really good filly so she could be a good shout from a small yard.”

To listen to The Paddy Power Media’s podcast, “From the Horse’s Mouth” click on podfollow.com/horsesmouth