Broadcaster and actor Simon Delaney and former rugby international John Hayes are getting active as they partner with Sport Ireland for Your Personal Best Month in November – and they’re calling on men over 45 in Kildare to ditch the excuses and get active. 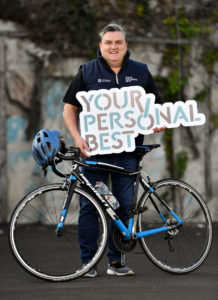 Your Personal Best Month is encouraging men aged over 45 to say, ‘no more excuses’ and to take part in 30 minutes of moderate physical activity five days a week. The campaign was created by Sport Ireland in response to repeated studies, including Sport Ireland’s most recent Irish Sports Monitor, which have consistently shown that males aged over 45, particularly those from disadvantaged communities, are amongst those least likely to be active. As a result, they suffer from worse health, mental and physical, and are more likely to die younger, than the rest of the population. 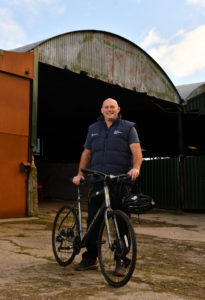 Research conducted as part of the launch of Your Personal Best Month shows that 61% of men over 45 believe they don’t get enough exercise. This isn’t enough to persuade them to get up and get out, as the research also shows that this group is using every excuse in the book when it comes to putting off getting active.

Of men over 45, 34% regularly make excuses for not exercising. The weather is the most common excuse, with almost two thirds of men over 45 who make excuses saying it’s either too hot, to cold or too wet to get out and get active, while 31% of them make an excuse every single day to avoid exercise.

Other excuses used to avoid exercise include just having eaten dinner (45%) and fear of missing their favourite television programme (16%), with 3% of men in this group saying they don’t want to add to the laundry as a reason to avoid breaking a sweat. More than half of men (57%) over 45 regularly convince themselves that they’ll ‘start on Monday.’

Simon Delaney, campaign ambassador commented: said: “I’m as good as anyone at making excuses and avoiding exercise. I much prefer watching a match than playing in one and have struggled in the past to find the motivation to get moving – particularly as we come into the winter months. When I heard about Your Personal Best Month, I was keen to get involved. It is the push I need to make a conscious effort to do more exercise every day, whether it’s walking the dog or popping to the shop on foot rather than taking the car. I’d encourage men like me to join us for the month of November, get a group of friends on board, set up a WhatsApp group or whatever works for you, and let’s support each other to get out and do more activity.”

The Your Personal Best campaign is being supported by the nationwide network of Local Sports Partnerships and sporting National Governing Bodies such as Cycling Ireland, Athletics Ireland and Get Ireland Walking, who will provide information, advice and programmes for men who want to become more active. The project is being funded by the Dormant Accounts Fund. Full details of Your Personal Best Month can be found at www.sportireland.ie/.

Sport Ireland Chief Executive Officer John Treacy said: “Sport Ireland are delighted to launch Your Personal Best month, which will help to shine a light on the need for men over the age of 45 to get more physically active and engage in at least 30 minutes of moderate exercise five days a week. It’s wonderful that this campaign is being supported by our network of National Governing Bodies and Local Sports Partnerships that reach into every community in the country, and this integrated approach will offer increased opportunities for those men who are looking to become more physically active. One of Sport Ireland’s key roles is to increase participation in sport and physical activity across all sections in society and Your Personal Best Month will play vital role in this.

“People can exercise and be physically active during Level 5 restrictions, and we would encourage everyone to continue to do so for their own wellbeing, but we also ask that people respect the guidelines and exercise within 5km of their home and if they are exercising with others to maintain social distancing of 2m as it’s important that we all play our part in keeping everyone safe.”

John Hayes played over 100 times for Ireland, winning a Six Nations Grand Slam as well as the European Cup with Munster. He admits himself that he became inactive after retiring from professional sport, but now enjoys regular exercise: “It changes completely why you’re doing it. When you’re doing it professionally, it’s your job. But when you don’t have anything making you do it, you might not do it as often any more. So it’s no harm to get a little reboot every now and again to make sure that you go back to it; Your Personal Best Month is about coming up with reasons to do it rather than excuses not to. The Sport Ireland website has loads of guidance about getting started if you haven’t got a sporting background.”