DESPITE maintaining a competitive distance for the opening half Kildare fell adrift in the final quarter to fall to a convincing defeat at the hands of local rivals, Laois, in the Liberty Insurance All Ireland Intermediate Championship played at Hawkfield on Saturday. 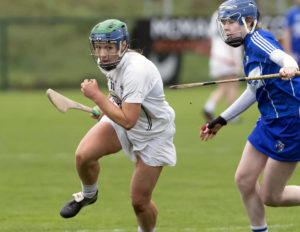 Kildare’s Siobhan Hurley turns inside the Laois defence to try and set up a score during the Intermediate Camogie Championship at Hawkfield Photo: Sean Brilly

With a new look Kildare outfit taking to the field without many marquee names it was a though ask for the young side. Regardless of this it was Kildare who took to the front first with Siobhan Hurley pointing inside the opening minute. The veteran centre forward having only returned to the Kildare set up the previous Friday, showed no signs of lethargy.

Despite Kildare getting off to a quick start it was Laois who seized the early momentum with Kirsten Keenan blasting over two quick points followed by her side’s first goal. Hurley kept Kildare tagging onto Laois’ coat tails before Kildare got back into the tie. Niamh Hegarty gathered the sliotar and her dipping shot deceived Aedin Lowry in the Laois goal and ended in the net to draw the sides level.

Laois points from Liaden Fennell and Keenan had two between the sides before Fennell cut through the centre of the Kildare defence before slicing over on the quarter hour mark. An exchange of points from Emer Reilly and Keenan left the Laois lead in tact as Kildare began to struggle with the pace and momentum Laois had built up.

The first half water break seemed to come at the wrong time for Laois; it broke the visitors’ momentum as on the return they were unable to find the fluidity in their attack that was ever present in the opening quarter.

They recovered through a Joyce Dunne to point. Gathering a puck out from Lowry from a Kildare wide, Dunne ran the length of the pitch before chipping over to extend the advantage to four before a fifth point of the half from Keenan before the break left Kildare trailing by five and not out of the tie by any means.

When the sides returned Kildare maintained the pressure on their counterparts and responded to an early Keenan point through Hurley and Leah Sutton to slice the deficit to four. With thirty five minutes played and four points separating the sides, this was as close as Kildare were to get to causing an upset and Laois rallied after being awarded a penalty.

Stepping up at the Milltown end of Hawkfield Clodagh Tynan struck but equal to the effort Orlaith Fahy stood strong. With the shot breaking down the centre of Fahy’s goal all the net minder could do was bat the effort to safety.

Unfortunately for her it was Keenan who was waiting for the rebound and she netted. Laois were beyond two scores clear of Kildare now and a comeback from the home side looked less and less likely.

With Kildare reeling from the goal, Fahy’s puck out was won by Laois and Aisling O’Dea gained possession and blasted past Fahy to take the Laois advantage to double digits as they began to push clear.

From here four points without any Kildare response ensured that any chance of turning the tide in the homeside’s favour was gone. Jessie Quinlan, Keenan, O’Dea and Dunne all raising the white flag that saw off the Kildare efforts.

Looking to stem the tide and prevent a significant deficit Sutton was again on hand to chip over with seven minutes left, but this failed to inspire the Kildare outfit as Keenan and Tynan rounded off matters for Laois before a final point from Sutton wrapped up the afternoons action and ensured to give Kildare a lot to work on in the two weeks that await them before they are due to take to the