WHETHER it’s in life, in work or in sport Jan Corcoran, otherwise known as “Jantastic” knows no boundaries. The Stoneybatter, Dublin, native, who lived for a spell in Westmeath but is now resident in Confey, Leixlip with as she says “my wife, and my dog” 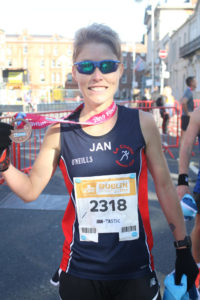 The nickname Jantastic was given to her by her friend, Therese Egan, and Jan lives up to the name every day in her work and in her sport.

Corcoran, now in her 40’s, didn’t take up running until her early 30’s but is now a veteran of marathons and endurance running. Normally the Le Cheile athlete would have competed in the Dublin City Marathon on the weekend just gone but because of Covid -19 restrictions had to settle for a Virtual Marathon on the Le Cheile track beside the Leixlip Amenities Centre where she acted as pacemaker for one of her clubmates.

Her Coach is Kerryman, John O’Regan, who famously coached and acted as guide runner to visually impaired athlete, Sinead Kane, for the Ultra Marathon.

Women’s soccer was initially Corcoran’s sport and she played with St Catherine’s and AIB in Dublin to a pretty high level and she also dabbled with Tag Rugby and GAA before the running bug took hold. “Running became my escape when my late grandfather wasn’t well. I was very close to my grandfather so it was a tough time. I was living in Westmeath at the time and my sister in-law encouraged me to join the local running club there.”

From initially running from lamppost to lamppost Jantastic quickly graduated to 5k’s and then to 10k’s and then on to half marathons. “When I started running however, I had no intention of going to the level I am at now, it was more of a community feel,” she explains. After moving to Confey she joined the Le Cheile Club and running became a lot more serious then, encouraged by coach, O’Regan.

Her first target in serious running was to complete a 3-hour marathon. In her first Dublin Marathon, which she says she really enjoyed, she posted a time of 3hrs .43 even though in her head she would have been happy with just a sub 4hr return. After a couple of more attempts which yielded 3hrs.04 and 3hrs.01 she finally returned a fantastic 2hrs.52 last year. “The training went really well and I hit all my targets so I was confident but not over-confident. Once the clock showed a 2, I didn’t mind what came after it,” she laughs.

Then things cranked up for Corcoran after that. O’Regan pushed her towards endurance running or ultra-running. Her My first 50K was last year also and she was placed second in the National Championship a feat she repeated earlier this year. “The 2021 Championship is schedule for Donadea in February and although I currently have a time of 3hrs.34 the course record, which is held by Catriona Jennings, is 3hrs 20, so it would be nice to get close to that, win the race and push up the world rankings.

The Le Cheile runner has also been selected on Team Ireland for the highly anticipated Anglo Celtic Plate (100k), possibly in March, which was rescheduled from September due to Covid.

Qualification for Olympics, another target for Corcoran, is expected to start after the Tokyo Olympics. “The current qualifying time is 2hrs 29 so I have three years to reach that target and I definitely think that’s achievable considering what I have done in such a short space of time up to now. What motivates me is that I have these goals and dreams that I want to achieve and they won’t happen if I stay indoors. I want to be up there with the best but John (O’Regan) pushes me as well. He does an awful lot of work for me and he doesn’t get paid for it.”

“I am not sponsored by anyone and it’s not easy to get sponsorship so I have to work to pay the bills at home and to buy runners and kit which quickly run out when you train twice a day six or seven days a week at long distance so my jobs as an anti-money laundering consultant helps in that regard. Sports and running are my passion though. If I could give up the work obviously I would because it would allow proper time for training and recovery like the elite athletes have. Working from home during lockdown has helped though.”

The Confey runner is grateful for the support of her wife, Louise, (“she does some running, mainly 5ks, she lets me do the mad stuff!), and their dog, Teddy (“I try to drag him out for a few runs too and he doesn’t be impressed.