Moynihan positive ahead of Clare clash

KILDARE’S Ladies Football Manager, Daniel Moynihan, is very positive ahead of his sides TG4 Intermediate Football Championship game which will be played on Sunday at St Rynagh’s GAA club in Offaly with a 1pm throw-in. 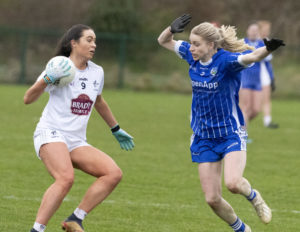 As well as Clare, Kildare are joined in the Group by Sligo and Laois whom they will play on the following two Sundays, 8 October and 15 October.

Kildare had an excellent League during the Spring, qualifying for the final with games to spare, before Covid – 19 restrictions put paid to the completion of the competition. Despite the disruptions of national and local restrictions the Kildare Manager is happy with preparations for Sunday’s Championship opener. “We’ve had some challenge games and had a good look at the squad and now we are only days away from the start of the championship which is great because at one stage we didn’t think it was going to happen. We take each day as it comes though in relation to Covid – 19. Realistically I could get a call from somebody on the Friday before the game saying they were a close contact but we are emphasising to the group to look after themselves and to travel by themselves.”

During the League his charges won five from five games to reach the Final where they would most likely have met Down. “We were going well. We’d won tough games with a number of variations so we were going really well when everything was cut short. We kept things going through the lockdowns through S&C and there was a charity run as well. Then we released them back to their clubs for the championship so for that they were playing competitive football and training twice or three times a week.”

Moynihan is under no illusions about the challenge that Clare will pose on Sunday. “They are a Division 2 team and a well-established team, and although they may have been beaten in a couple of League games they are playing at a completely different level. We played them in an Intermediate Final a few years ago and Kildare came out on top. They still have a few players from that teams including full forward, Niamh O’Dea, a quality player, an outstanding talent. She’s been flying with her club, The Banner; they won the county title this year. Then there’s her clubmate, Grainne Nolan, another tricky forward.”

Of his own team the Manager is quite happy with the players at his disposal. We are delighted to welcome back Mary Hulgraine in goals, a great addition. Then in defence we have the spine in the team in Lara Gilbert at full back and Grainne Kenneally at centre half. Grainne is very experienced and came from Waterford where she won an All-Ireland with them. Then further afield we welcome back Erica Burke around the middle and in the forwards, we have Grace Clifford, the captain, and Roisin Byrne, who’s back after a shoulder injury and is flying again. We have a lot of good players, a lot of youth and experience which is something we haven’t had over the last number of years.

Looking forward to Sunday’s game Moynihan is positive. “They see themselves as a championship team, they can lift themselves for championship football so I’m hopeful that on the day we can lift ourselves and pull off, maybe in some people’s eyes a bit of a shock but others might say we should be winning matches like this. Clare are one of the top teams in the country so if we can take their scalp we’d be doing really, really well.”