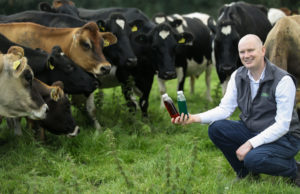 Moone based Agri-tech firm Terra NutriTECH have won the gold award for technology for their recently launched TMR precision liquid mineral dosing system for feed wagons at the National Dairy Show which was held virtually for the first time ever this year. The new technology system which was launched in October impressed the judges for its innovation and practicality in assisting with common dairy farming chores and problems with sound techniques that help and revolutionise time savings and labour for the farmer.

The technology used by the company is the first precision liquid mineral dosing system in the world which gives full real time visibility and control to farmers whilst reducing labour and eliminating a lot of spillage and waste while improving animal health. The new system was developed as a pivot from an existing farm drinking water based version. The revolutionary systems are capable of precisely dispensing the optimum amounts of essential minerals whenever they are needed such as Magnesium, Copper, Selenium, Zinc, Iodine and vitamins which are beneficial to the herd in many different ways. One of the main positives stemming from its use is the increase in herd fertility with an average improvement of 4-7% whilst also easing problems of difficult calvings and milk fevers. Beef farmers using the Terra NutriTECH systems in the past have seen better weight gains of 3-6% and with other general benefits of their herd such as a decrease in lameness and health issues such as grass tetany leading to reduced veterinary bills.

Terra NutriTECH CEO Padraig Hennessy said “We are delighted to win the best Technology award from the National Dairy Show  especially given the level of competition we were up against. When we first looked at improving the process of putting minerals into feed we realised that if we applied precision we could improve the health of the animals and eliminate another job for the farmer. We are getting excellent feedback from farmers using our mineral system and have already attracted intertest from international markets. We always have innovation at the fore of our company and to have this recognised really helps our team to continue to search for improvements to help farmers reduce labour and increase efficiencies.”

The success of the company to date has seen it employ just 3 people 4 years ago and this has now increased to 22 in its new HQ and purpose built factory in Co Kildare, Ireland. The company has seen consistent growth since its set up in 2012 as well as recent expansion of sales in Belgium and Germany. Further encouraging signs see their mineral dosing systems make their entry into Denmark, Czech Republic, Hungary and Uruguay by the end of this year with Africa, Canada and the USA on the horizon for next year.