From Monasterevin to Philadelphia and back for Claire Melia

BASKETBALL Ireland recently announced Gotham Drywall as the new sponsor of the Irish senior women’s team. The initial one-year deal will see Gotham Drywall support the team through to the 2021 FIBA Women’s European Championship for Small Countries, which take place in Cyprus from 15 – 21 June. 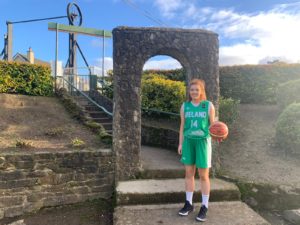 One of those who hopes to be on that Irish team is Claire Melia from Monasterevin.  From a family of five kids, two brothers and two sisters, Claire says she got the basketball bug from being brought around to watch her sisters playing with schools in Rathangan before they moved to the Portlaoise club.

“I started with Portlaoise Panthers when I was about 14 though football would have been my number one sport. I played football from U8 with Ballykelly and played with the lads’ teams to U12. Then I transferred to Monasterevan and I played football with club and county all the way up,” Melia told us.

“I probably have never have concentrated on basketball. Last year I played football up to June before I went to America. I didn’t play this year because of Covid-19,” she added.

The Monasterevin native won the National Cup with Panthers earlier this year “which was a nice feeling and it was good for the girls after putting in all the hard work. I was only there for the end of the competition.”

Playing with the Irish Basketball team from U16 upwards Melia attracted the attention of US Colleges and with her parents she visited such places as St Josephs, Philadelphia, St Peters in NY and Utah Valley University before settling for a scholarship with the Philadelphia College.

I was attracted to St Joseph’s because of its Campus and the city was close to the Campus. The city wasn’t too big either, it was a nice compact place. We could also tip up to NY at the weekends like taking a trip up to Dublin.

The Irish international decided however that US College life wasn’t for her. “I came home a few days into January this year as I wasn’t enjoying it over there anymore. Players were upset over basketball. Because of the US scholarships players do what they are told otherwise they lose out. That wasn’t my scene. I saw players getting upset over a sport that I play to enjoy.

A chance to play with UCC Glanmire then arose and Melia grabbed it with open arms. “I always wanted to play under their Coach, Mark Scannell so I thought this year was the year to take my chance to play with the girls who are all of a high standard down there. It’s competitive but it’s enjoyable. When I went down there, I never felt like I was new, I felt like I had been there for years.”

“Training in Glanmire was so much more enjoyable. Aine McKenna, Casey Grace Claire Rockall are high standard players and you are learning off them and it’s making you better. When I’m marking Casey Grace, I have to run a bit faster that I usually run. They are such a team; everyone is playing for each other.

A silver medal in the Europeans with the Irish team in 2017 followed by a bronze medal with the U20’s in Kosovo arrived for Melia. “I still watch back on the games from 2017. The atmosphere and the crowd were special. You wouldn’t notice it when you were playing; it’s only when you look back on it on video that you can savour it,” she laughed.

Women’s Basketball has been boosted by the sponsorship from Gotham Drywall and the new Glenmire recruit welcomes the initiative. “The sponsorship from Gotham Drywall will be a great help to the team. Most of us have been playing for Ireland from U16 and it’s all been self-funded. Our parents have put so much money into it. Some people can’t believe that you have to pay to play for Ireland so this sponsorship will be a great help,” she explains.

Coach, James Weldon, still has to pick the Irish team for the Europeans in Cyprus next year. There is a very strong panel there so it won’t be easy to get on the team.

“Hopefully 2021 will be a bit better year for us all and I’ll be fighting hard to make the Irish team for the Europeans but it won’t be easy to make the team.” Claire concludes.