KILDARE are one step closer to an LGFA Intermediate All-Ireland Football Championship Semi-Final after a defeating a poor Sligo side in Kinnegad on Sunday. Once Kildare fought and finally overcame Clare in the first-round, Daniel Moynihan’s side easily brushed past the relatively diminutive Sligo side in this second round. 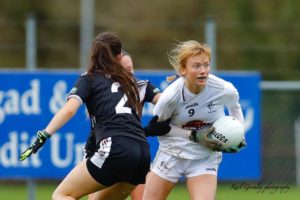 Another excellent performance from Erica Burke in Kildare’s defeat of Sligo on Sunday Photo: Karl Gormley

Unsure if they’d regain their sensational league form after the lockdowns, their result against Clare and now Sligo has returned them to a winning course.

After the opening forays against Sligo in Kinnegad, it was clear that Kildare were walking away with their second victory. Four first-half goals from Roisin Byrne (2), Neasa Dooley and Siobhan O’Sullivan gave Kildare a 17-point half-time lead.

Despite Erica Burke beginning the second-half with a 37th minute goal, Kildare’s cut- throat attitude reduced somewhat as the competitive zeal drained from the game. The result was never in doubt, even before the game, but Moynihan won’t have been completely pleased with the second half fade out.

After the game he was in thankful mood, recognising that his side won their second successive game, which four weeks ago would have been a sensational achievement as they face into a third round against Laois.

“I think we have to hold ourselves to a higher standard. We were excellent in the first- half, but obviously when you make five changes it’s going to be difficult to keep that flow. We’re not resting on our laurels, we can’t, it’s knockout football. Another game is coming next Sunday and we’ve learned a lot from that second-half on what we need to improve on for the Laois game,” said Moynihan.

Byrne opened the scoring five minutes into the game, and while Lara Curran doubled their advantage, Byrne had the first of Kildare’s four first-half goals in the net. Captain, Grace Clifford reacted to ball coming down off the upright, and her quick thinking meant Byrne’s 12th minute goal gave Kildare a 1-2 to no score lead.

Sligo responded through Louise Lindsay’s long-distance point two minutes later. But as Sligo only scored one further first half point, essentially, the game was decided by half- time, if not the first water break.

Kildare continued their dominance in the closing quarter, scoring 3-4 without a Sligo response. Byrne had her second goal in the 15th minute when Grainne Kenneally found her from a short ‘45. Neasa Dooley soon had Kildare’s third goal in the net when Clifford’s 20th minute pass gave Kildare a 3-2 to 0-1 lead.

A 21st minute Siobhan O’Sullivan goal, where she intercepted the Sligo kickout, and four further points gave Kildare a 4-7 to 0-2 lead at half time.

Clifford, Curran and Byrne relished the space given by the Sligo defence, and that continued in the second half, but Kildare’s potency began to diminish over the half hour.

After an opening Dooley point, substitute Ellen Dowling’s weighted pass sent Burke in behind the Sligo defence. When she found the net for Kildare’s fifth goal, the game was secured.

Curran (2f), Clifford, Dooley and Dowling all proceeded to heap scores on Sligo, and while Sligo only registered two second-half points, Kildare allowed them too much possession.

The nature of the half-time margin meant Kildare were always playing within themselves, but Moynihan’s high standards means that any dip in performance won’t be tolerated ahead of a tough Laois encounter.