Kildare advance to semi-final meeting with Meath in Croker

WE’VE seen this film before, Kildare struggling to assert their supposed superiority in the early rounds in Leinster. On this occasion they escaped but it was touch and go right to the end against Division 3 side Offaly. Meath, who planted seven goals in Wicklow’s net earlier in the day, will hardly be quaking in their boots. 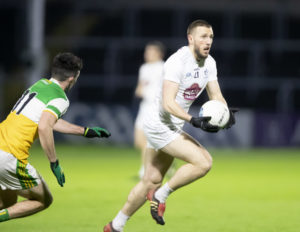 Jack O’Connor and his selectors introduced inspiring substitute Neil Flynn who kicked a free from out on the left and also kicked a point from a mark to contribute to Kildare’s victory against Offaly at O’Moore Park, Portlaoise

The optimist will point to the 40 shots from the winners, but a 50% conversion rate will not win many championship games and only for three fine saves from Mark Donnellan, hard-working Offaly might have buried their Lilywhite hoodoo which stretches now to a dozen games.

Jack O’Connor handed out seven championship debuts, five as starters, which in theory offers some mitigation for a sloppy performance, but if anything, it might have been worse but for the performances of some of the newcomers, most notably Darragh Kirwan.

While Kevin Feely and Aaron Masterson dominated midfield, Kildare didn’t press hard enough to force the Offaly kick-out to go long more often. This and a propensity to give away soft frees particularly in the first half kept Offaly in the game.

Though highly regarded at underage level, Naas man, Kirwan, is the find of the season in Kildare and credit to O’Connor and his team for spotting what he could add to the forward line. The team’s youngest player was outstanding at full forward, scoring six points, five of them from play, while more experienced players floundered around him.

Paddy Brophy was the only other starting forward who can be fully satisfied with his outing, the Celbridge man getting on plenty of ball as usual, minding it well and weighing in with three points from play.

Poignantly, though, it was Neil Flynn who buttoned down Kildare’s win with a late cameo that featured three points of outstanding quality, including a free from the sideline under the stand and a mark converted with the outside of the boot from the opposite wing.

Flynn and his family laid his father Fergal to rest the day before.

Kirwan took just 19 seconds to open his championship account, getting on the end of Ben McCormack’s pass, and Kildare remained one step ahead of their opponents in the first quarter. Bernard Allen levelled things straight from the kick-out but Jimmy Hyland got on the end of a Kirwan knock-down and Brophy finished a move he had started with an interception in his own half.

The game was wide open, a throwback to different times almost. Niall McNamee, well held by another debutant Shea Ryan from general play scored an 8th minute free to narrow the gap to a point before McCormack stole through on the right-hand side and his effort just cleared the crossbar.

Offaly’s best forward Cian Farrell took advantage of a quick free from the energetic Anton Sullivan and after a brilliant score from Kirwan, McNamee pointed another free to make it 0-5 to 0-4 for Kildare at the water break.

The second quarter saw both sides reel off five points but Kildare’s goal had its first let-off on 20 minutes when Donnellan seemed to get a touch to Farrell’s effort and Ryan completed the job with a clearance off the line.

Peppered between the wides Darragh Malone, the Allenwood man who impressed in the first-half in particular, scored a beauty from 30 metres, Brophy drove into the middle from the wing for another from play, Kirwan added his third and fourth of the half and a frustratingly off-key Daniel Flynn found the range for the only time in the game.

Offaly, though, with Farrell to the fore, kept in touch and went in only a point behind at 0- 10 to 0-9. Four of their five points came from the Edenderry man in that quarter with McNamee slotting his third free. Kildare were back to giving away the sort of soft frees they seemed to have eradicated against Westmeath.

Fergal Conway found himself called ashore at half-time with Mattie Byrne stepping in for his debut and he gave a good account of himself around the middle sector.

But the opening six minutes of the second half saw Kildare at their most wasteful with two wides and two shots left short. Daniel Flynn’s game ended when his latest intercepted pass drew a curly-fingered response from O’Connor in the 41st minute.

Typically, it was Kirwan who got Kildare moving again, scoring from a mark but Ruairí McNamee waltzed through untouched to open Offaly’s second half account. Brophy and Farrell exchanged points before Kildare edged two clear with Masterson taking a pass from Jimmy Hyland to score from range.

Kildare were living dangerously though. In the 46th minute the defence parted obligingly again for Allen to bear down on Donnellan’s goal but the big Maynooth man spread himself to make a fine save with his legs.

After McCormack had stretched Kildare’s lead to three points with a fine point from long range, Offaly again pierced the Lilywhites’ defence but Colm Doyle must have felt like he’d run straight into a Panzer tank when Donnellan blocked his path and put him on his backside. Despite Offaly protests David Coldrick awarded a free out and yellow-carded the indignant Doyle for dissent.

When Hyland pointed a free from 45 metres from his hands after a foul on Kevin Flynn, Kildare looked like they might finally push on but instead Offaly scored four of the next five points to bring the gap down to the minimum (0-16 to 0-15) after 64 minutes.

Substitute Joseph O’Connor and Ruairí McNamee scored the first two from play and then Farrell from a ’45 and ‘keeper Paddy Dunican from a 40m free ensured Kildare went into the final minutes under pressure. Kirwan’s best score of the day, beautifully angled from the left-hand side was their only response in that period.

It was Maynooth’s Flynn who steadied things. When Byrne won a fortunate enough free on the stand sideline, Flynn sent a perfect free from the ground over the bar. A minute later he won a mark on the opposite wing and with the outside of his boot sent that over as well.

Another substitute Paul Cribbin took a pass from Kevin Feely to stretch Kildare four ahead as we entered extra time but Sullivan kept it interesting with a point before Flynn again from a free secured a far from impressive win.

This felt like a backward step for O’Connor’s charges and they are up against it in Croke Park on Sunday.